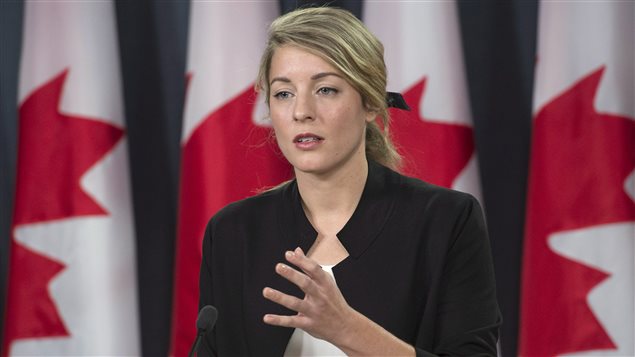 Minister of Canadian Heritage Melanie Joly announces the momument for the victims of communisim will start over with a new location and selection process Thursday, December 17, 2015 in Ottawa.
Photo Credit: PC / Adrian Wyld

Liberals want to move monument to victims of communism

The Liberal government is moving ahead with a controversial monument to victims of communism in Ottawa but wants to redesign it and move it farther west of Parliament Hill.

Speaking at a press conference in Ottawa Thursday morning, Canadian Heritage Minister Mélanie Joly said she’d like to see the monument moved back to the originally planned site at the Garden of the Provinces and Territories, farther west of Parliament Hill.

Joly said the government will also be launching from scratch a new competition for a winning design of the monument, pledging an “open and transparent” process in jury selection for the competition. Joly said the public will be consulted about the new design. She promised to release the details of public consultations in early 2016.

“Eight million Canadians can trace their origins to countries were there were totalitarian, communist regimes,” Joly told CBC television program Power and Politics. “So that’s why the idea was good but the process was flawed.”

The monument championed by the previous Conservative government had also attracted controversy in part because of the planned location next to the Supreme Court of Canada building on Wellington Street — land that was reserved for a new Federal Court building.

The Royal Architectural Institute of Canada (RAIC), which had opposed the previous design and location of the monument, said it was “relieved at today’s announcement.”

“It is good news that the Government of Canada has chosen to respect the Long Term Vision and Plan (LTVP) for the Parliamentary and Judicial Precincts,” said RAIC President-elect Allan Teramura.

He noted that the plan had been developed over the past 100 years by some of Canada’s finest architects, urban designers, and landscape architects.

Joly said Thursday the government’s financial contribution to the monument will be capped at $1.5 million.

Tribute to Liberty non-profit organization, which is spearheading the monument project, will match the government’s contribution, said the organization’s chair Ludwik Klimkowski.

“I am really smitten with the fact that Madam Joly is so open and so transparent that we were able to talk at length as to what needs to be accomplished,” Klimkowski told RCI.

“We are committed to the matching of funds from the federal government and I have no hesitation in saying we will meet our commitment .”