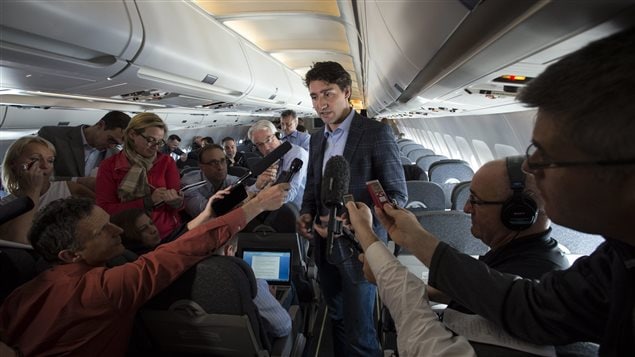 Trudeau will be at the WEF from January 20 to 23, 2016, and will get a chance to “share the real and positive economic changes he intends to undertake to create jobs, strengthen the middle class, and grow the Canadian economy,” the PMO said in a statement.

The prime minister is expected to tout his government’s pledges to invest in transit, green technologies, to enact tax cuts for the middle class and small businesses, presenting Canada as a business-friendly, reliable and stable investment economic partner.

“At the World Economic Forum, we will signal the return of a more positive, open, and innovative Canada to the international business community,” Trudeau said in a statement. “In an increasingly interconnected global economy, Canada’s diversity and connections to the world are among our greatest economic assets, and will prove vital as we work to grow the middle class.”

At the forum Trudeau will also have the opportunity to discuss a wide range of international issues and hob-nob with the who’s who of world political and business elites, said Ferry de Kerckhove, a former high-ranking Canadian diplomat, Senior Fellow at the Graduate School of Public and International Affairs at University of Ottawa.

“It’s a huge circus, Davos has become probably one of the largest shows in the world when it comes to bringing luminaries of from all places of the world,” de Kerckhove said. “In terms of networking I don’t think there is a better place in the world: you’ve got everybody who’s somebody that is there.”

(click to listen to the interview with Prof. Ferry de Kerckhove)

There is always a very sophisticated program for the prime minister developed in collaboration with the Canadian ambassador in Switzerland, de Kerckhove said.

“He will have the chance to speak, participate in panels and a lot of people would want to see him,” de Kerckhove said.

A spokesman for the prime minister’s office said Monday they are still working on Trudeau’s itinerary for the forum and it was expected to be released soon.

Trudeau will be joined in Davos by Minister of International Trade Chrystia Freeland, Minister of Finance Bill Morneau, Minister of Innovation, Science and Economic Development Navdeep Bains, Minister of Environment and Climate Change Catherine McKenna, and President of the Treasury Board Scott Brison, each of whom will have his or her own program of meetings during the four-day conference, said the press release.

De Kerckhove said Trudeau’s “rock-star status” and his familiarity with many of the world leaders he met in his childhood with his father former Prime Minister Pierre Elliott Trudeau will help him open many doors.

Trudeau is also expected to use the opportunity to talk to Canada’s European partners, particularly, the Germans, about speeding up the finalization of the Comprehensive Economic Trade Agreement (CETA) with the European Union, which was officially presented in September 2014 by then Prime Minister Stephen Harper and European Commission President José Manuel Barroso in Toronto, de Kerckhove said.

On the other hand, Canada’s trading partners are likely to press Trudeau on whether he plans to follow through with the Transpacific Partnership agreement, signed by the preceding Conservative government during the final days of 2015 election campaign, de Kerckhove said.

Trudeau is also expected to face more questions about the controversial $15-billion deal to sell state-of-the-art Canadian light armoured vehicles (LAVs) to Saudi Arabia and Canada’s commitment to the fight against Islamic State militants in Iraq and Syria, de Kerckhove said, arguing that Trudeau should stick to his guns and go ahead with the sale.

“There is a kind of a balancing act between the values and the interests side, but I think in this particular case there is a superior interest, which is the stability in the region,” de Kerckhove said. “Of course, we can’t deny that there are regimes like Saudi Arabia that from the human rights point of view are totally beyond the pale, but there is a higher interest over the long run.”