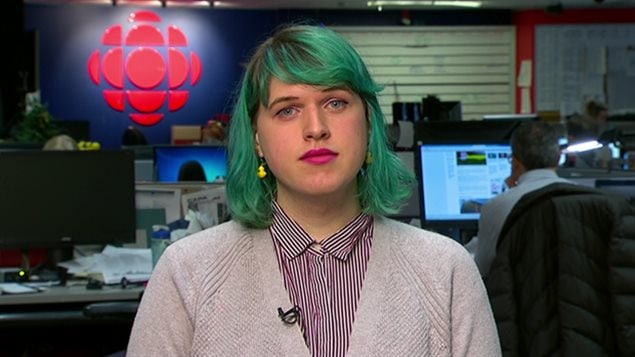 Quinn Nelson, a transgender university student, told CBC she identifies as neither male nor female. She would like to have another option on the census questionnaire.
Photo Credit: CBC News

Canadians will soon be obliged to fill out a questionnaire for the 2016 census and they will be asked to check a box for gender with only two choices: male or female. That excludes a whole spectrum of people who identify with neither, says Helen Kennedy of the advocacy group, Egale Canada Human Rights Trust.

“There are people in every region of this country who do not identify as neatly as male or female and are gender non-conforming, they are gender-variant, they’re transgender, intersex. So, we’re effectively excluding those people from our society,” she says.

“And when you do that you’re not open to looking at where our services are lacking in terms of addressing the needs of gender-variant people…There could be effects in terms of allocation of health funding, housing, work around education,” says Kennedy.

Egale first raised the issue in 2006. She notes that Canada’s government changed hands after the October 2015 election and that the new administration is more open to discussion on gender issues. It will be too late to make changes to the 2016 census, but Egale will lobby for change for the next census in 2012.