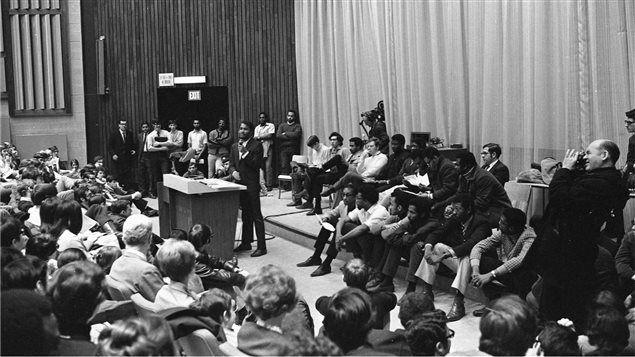 Selwyn Jacob says he wanted to make a film about the infamous Sir George Williams Riot the moment he heard about it from his professor at the University of Alberta back in 1969.

The Trinidadian-born award-winning producer at the National Film Board of Canada said he felt the reverberations of the protest by fellow Caribbean students in Montreal reach all the way to Alberta, especially since one of the protestors was from his own village.

The protest began when a group of Caribbean students at Sir George Williams University (now Concordia University) started to suspect their professor of biology of racism and lodged an official complaint, which was dismissed by the university.

The two-week peaceful protest eventually turned into a full-scale student uprising with students occupying parts of the Hall building, including the computer lab on the ninth floor.

Millions of punched computer cards and other documents were sent flying out the windows, onto the counter-protesters chanting racist slogans in the street below, littering de Maisonneuve Boulevard and surrounding streets.

“When this incident broke and I saw the imagery, I felt here was a story, wow!” Jacob said. “This could be a film, it felt cinematic and I knew it’s going to be dramatic in terms of people had to go to jail, they were deported, racism, all of the elements.”

And throughout the years he was getting bits and pieces of information that led him to question the dominant narrative proposed by the mainstream media at the time, Jacob said.

“Were the students really that stupid, they were going to destroy the computer centre, set it on fire and then they were locked in?” Jacob said. “And then I started meeting a whole bunch of people and the story started going off in various tangents, and that’s when I felt this is a huge story.”

But Jacob had to wait over 40 years to find someone who could tell that story, until four years ago at the Whistler Film Festival, he met Vancouver-based writer and director Mina Shum and pitched her the idea of the film.

“My immediate response was personal,” Shum said. “The fact that it’s hard in today’s world to discuss racism even with close friends, without people getting their back up or getting defensive, and that these students actually stood up and said, ‘Hang on this is racism, we’re going to charge it, we’re going to write it on a piece of paper and we’re going to protest.’ It seemed really heroic to me.”

Shum, who was born in Hong Kong and grew up in Vancouver, said as an immigrant she felt an immediate connection to the story.

To make “Ninth Floor” (a reference to the ninth floor computer centre) Shum met with the original protagonists in Montreal and Trinidad. And the film took an emotional toll on her as she interviewed them one by one, Shum said.

“Forty-six years later they are telling me their stories and it’s as if they were there yesterday,” Shum said. “Those wounds are very deep and they still exist. It’s almost as if it opened up some wound that needed to be addressed.”

The conversations she’s heard at the screenings of “Ninth Floor” make her hopeful that race relations in Canada have evolved in the last 47 years, Shum said.

“The fact that Selwyn and I made the film with the complete support of the National Film Board, with the support of Concordia, that gives me a lot of hope that we are in a slightly different place,” Shum said. “Can we do better? Yes we can do better.”

“Ninth Floor” begins a theatrical run at the Cinéma du Parc in Montreal on January 15. It will be shown across the country, as well as on international festivals, Jacob said.