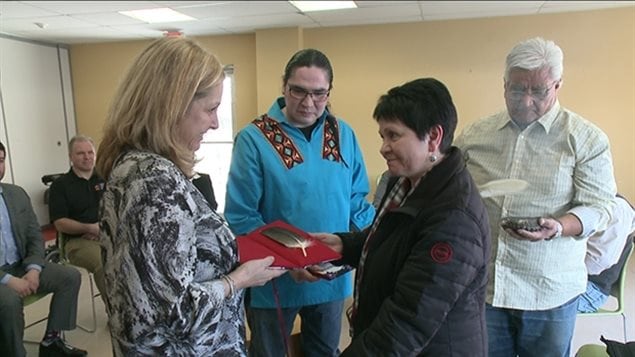 Witness may swear oath on feathers in Ottawa court

It is tradition in Canadian courts for witnesses to swear to tell the truth as they hold a hand on the bible, but now an Ottawa courthouse has eagle feathers that may be used by aboriginal witnesses instead, reports CBC. The eagle has great importance in Canada’s many indigenous cultures and its feathers are often used in spiritual ceremonies.

Two eagle feathers were presented to the court on January 18, 2016 in a special ceremony. Greg Meekis, an aboriginal justice coordinator, heard last summer about a client who wanted to swear on a feather instead of the bible.  So he decided to make to available to the Ottawa court.

“I was gifted with feathers during the course of my life …,” Meekis told CBC. “I’ve had these two, and following the teachings that we are just carriers of these sacred items, the keepers, until such time that there’s an opportunity to pass them on, I saw this opportunity to pass these two eagle feathers on to the courthouse. That way they’ll be available to our people when the time comes.”

Several courts across the province of Ontario have been using eagle feathers to make the court process more inclusive and relevant to indigenous people, notes CBC reporter Waubgeshig Rice.

The Canadian government has made some efforts to recognize the vast cultural differences between its justice system and practices in aboriginal communities. In some parts of the country, it offers alternative justice programs based on indigenous traditions.

Story and photo from Wawbgeshig Rice of CBC News.