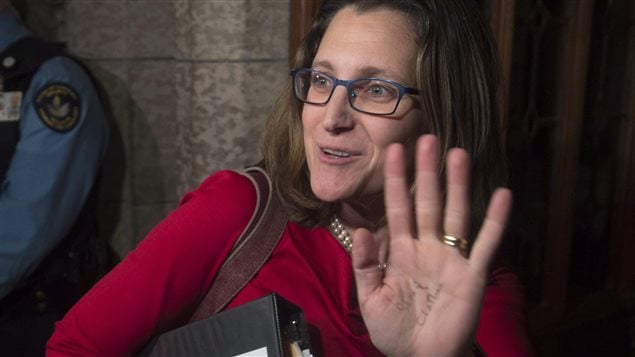 International Trade Minister Chrystia Freeland waves to reporters as she makes her way to Question Period in the House of Commons Tuesday January 26, 2016 in Ottawa.
Photo Credit: PC / Adrian Wyld

Signing the free trade agreement is in Canada’s interest even if the Liberal government doesn’t ratify the deal in the end, Freeland said.

Speaking to reporters on the phone from Auckland, New Zealand, Chrystia Freeland said putting her signature under the dotted line of the free trade deal with 11 other Pacific Rim countries ensures that “Canada remains part of the process.”

In addition, the original signatories to the free trade deal get privileges that will not be available to countries that join the trading block later, Freeland said without specifying what those “privileges” were.

Representatives from the 12 Pacific Rim countries, including economic heavyweights the U.S. and Japan, joining what’s being described as the largest free trade area of the world will gather at Auckland’s Sky City Casino at 5:30 p.m. ET (11:30 a.m. Thursday morning, local time.)

Today’s ceremony kicks off a two-year ratification period, during which the United States, Japan and at least four of the remaining 10 countries must approve the final legal text in order for the deal to take effect.

“As we made very clear last week, there is a very big difference between signing and ratification.”

The Liberal government of Prime Minister Justin Trudeau is committed to a full parliamentary debate on ratification, Freeland said.

The government has also asked the House of Commons and Senate trade committees to conduct a comprehensive study of the deal and report back before an implementation bill is introduced, Freeland said.

In addition to the debate in parliament, the Liberals are also conducting thorough public consultations with various industries and groups likely to be affected by the massive trade deal, Freeland said. She and her parliamentary secretary David Lametti have criss-crossed the country conducting more than 200 meetings, Freeland said.

“I place great importance on the consultations that have begun it’s very important to hear from Canadians it’s a big and complicated deal, it’s important for us as a country to discuss its many implications,” Freeland said.

Asked whether the government has conducted an economic study of TPP’s benefits, Freeland said the government was “looking at what the impact would be of the TPP on the Canadian economy.”

“That is an important part of the analysis and the conversation that Canadians need to have,” Freeland said. “It’s a big job. And we are working on it.”

The final text has been legally scrubbed in English, French and Spanish and posted online by New Zealand.

With reports from CBC News