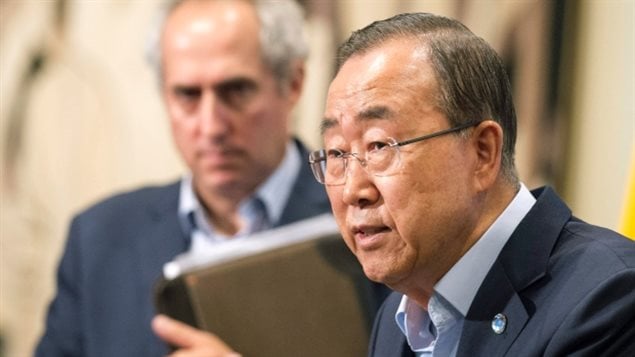 United Nations Secretary General Ban Ki-moon is expected to respond this month to a report on sexual abuse by peacekeepers in the Central African Republic.
Photo Credit: Eskinder Debebe/The United Nations via AP

The United Nations has failed to solve a crisis of peacekeepers abusing the people they are supposed to protect, and it’s time member states take over management of the issue, says AIDS-Free World. The non-governmental organization co-founded by Canadian Stephen Lewis has campaigned hard for action to end what it says are decades of abuse in several countries.

The latest cases to be investigated were in the Central African Republic. “Unfortunately, the United Nations is casting this as an anomaly, as though somehow the Central Africa Republic were a strange case, a mysterious case. Up to 20 countries send troops to the CAR and to other missions around the world as well. And for some mysterious reason, when they arrive in the CAR they begin to sexually abuse the women and children there. That’s not the case,” says Paula Donovan, co-director of AIDS-Free World.

An investigation into the allegations in CAR led by Canadian Justice Marie Deschamps described abuses it found as “indicative of a systemic problem” and it described “a gross institutional failure to respond to the Allegations in a meaningful way.”

Donovan says it’s time management of the crisis be taken out of the hands of the UN bureaucracy and that an oversight board be appointed by member states instead. It would monitor reports of abuse in real time and report back to member states until the UN’s “systemic problem” is solved.

The secretary-general of the UN is expected to comment on the Deschamps report sometime this month and Donovan says some member states are already discussing the possibility of creating an oversight board. She hopes the go through with it.

“Twenty years,” says Donovan. “Some of the first victims who came forward and reported UN peacekeeper sexual abuse are now adults. They are in their thirties. It’s preposterous that is should still be going on.”