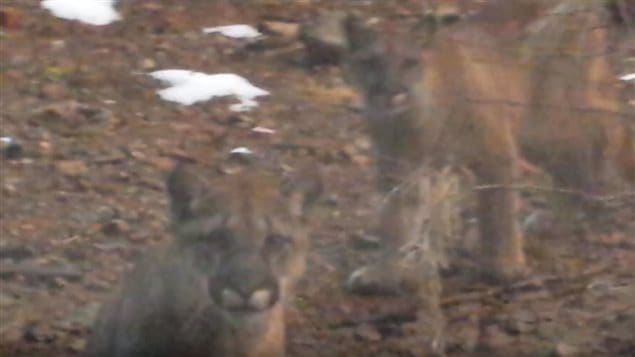 This still picture from a video posted to Youtube by a user called Nashzilla1 shows two of the three cougars that surrounded his car on Vancouver Island, British Columbia.
Photo Credit: Nashzilla1/Youtube

‘He wants to eat me’: B.C. man surrounded in his car by 3 cougars

A British Columbia man got the thrill of his life when he encountered not one but three young cougars on Vancouver Island Tuesday night.

Adam Nash filmed the exhilarating encounter as he was trapped in his truck on Forbidden Plateau Road near Courtenay for about 20 minutes.

“At first I thought it was a deer, but then I saw a tail and I knew it was a cougar. I’ve never seen one before,” Nash told CHEK TV, a local television station.

Wildlife expert and Science Director at Raincoast Conservation Chris Darimont told CHEK TV that the cats appeared to be juveniles and like most kitties, they are intensely curious.

“This was rare because it was juvenile cougars,” Darimont said. “They were curious, which isn’t rare for a kitten, but to express that curiosity to a human was very special.”

According to Vancouver Island Wilderness and Historical Conservation, of the estimated 4000 cougars in Canada, 3500 live in B.C. And Vancouver Island, which represents only 3 per cent of B.C.’s land area, is home to nearly 875 cats, resulting in the highest concentration of cougars in the world.

“Cougar attacks, though rare, have helped these animals to become feared and misunderstood, and their predation on farm animals and the Vancouver Island Marmot have made them the target of occasional government sanctioned kills,” said a VIWHC online information pamphlet.