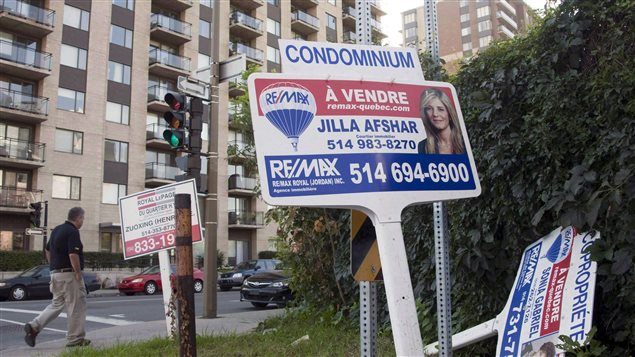 A sale signs stand in front of a condominium Tuesday, September 27, 2011 in Montreal. According to statistics released on Feb. 16 by The Canadian Real Estate Association (CREA), national home sales rebounded in January 2016 compared to the previous month.
Photo Credit: PC / Ryan Remiorz

The average price of a Canadian home sold in January rose by 17 per cent to $470,297 compared to the same month a year ago, according to statistics released Tuesday by The Canadian Real Estate Association (CREA).

But these numbers are skewed by the red-hot housing markets in the Greater Vancouver and the Greater Toronto Area (GTA), said the report.

If these two housing markets are excluded from calculations, the average is a more modest $338,392 and the year-over-year gain is reduced to eight per cent, said the report.

Furthermore, if British Columbia and Ontario are excluded from calculations completely, the average price slips even lower to $286,911, representing small a decline of 0.3 percent year-over-year.

“January 2016 picked up where 2015 left off, with single family homes in the GTA and Greater Vancouver in short supply amid strong demand standing in contrast to sidelined home buyers and ample supply in a number of Alberta housing markets,” said Gregory Klump, CREA’s Chief Economist.

Tighter mortgage regulations that came into effect in February may shrink the pool of prospective home buyers who qualify for mortgage financing and cause national sales activity to ease in the months ahead. Klump said. 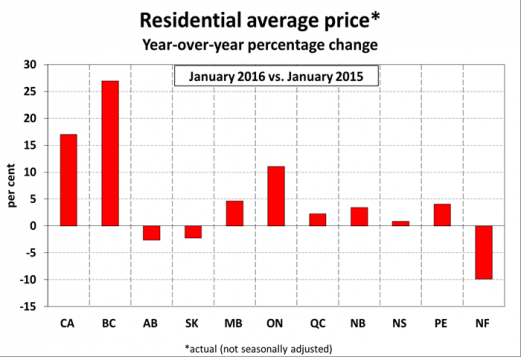 By contrast, home prices retreated by about three percent on a year-over-year basis in Calgary, by about two per cent in Saskatoon, and by less than one per cent in Regina.

Prices crept higher on a year-over-year basis in Ottawa (+1.10 per cent), rose modestly in Greater Montreal (+1.48 per cent) and strengthened further in Greater Moncton (+6.57 per cent).

Housing market analysts also keep an eye on the listings inventory. It’s expressed in terms of months of supply, which means the inventory figure is the amount of time it would take to sell every home on the market at the current pace of sales.

For January, the inventory figure dropped to 5.3 months, its lowest level in more than six years. The national figure is being pulled lower by increasingly tighter housing markets in B.C. and Ontario, said the report.

“If listings in these and nearby markets were not in such short supply, January sales activity would likely have reached even greater heights,” CREA president Pauline Aunger said. “Meanwhile, other major urban housing markets have an ample supply of listings, particularly where some homebuyers have become increasingly cautious amid an uncertain job market outlook.”