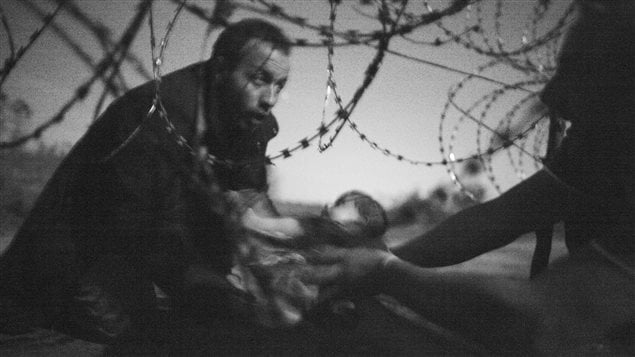 The winning photo shows a man passing a baby through a fence at the Hungarian-Serbian border on August 28, 2015.
Photo Credit: Warren Richardson, Australia

A night time photo of a refugee and child seeking to cross a barb wire fence into Hungary is the winner of the 2015 World Press Photo of the Year. It was taken by independent Australian photographer Warren Richardson, now based in Budapest, Hungary. The contest features photos that capture an event of great journalistic importance.

This photo and 150 other prize-winners will be exhibited from August 31 to October 2 in Montreal’s historic Bonsecours Market.  The building is in a tourist area and last year’s exhibit of World Press Photo contest winners was visited by more than 51,000 people.

Using a flash would have attracted police

Richardson explained how he captured the shot:

“I camped with the refugees for five days on the border. A group of about 200 people arrived, and they moved under the trees along the fence line. They sent women and children, then fathers and elderly men first. I must have been with this crew for about five hours and we played cat and mouse with the police the whole night. I was exhausted by the time I took the picture. It was around three o’clock in the morning and you can’t use a flash while the police are trying to find these people, because I would just give them away. So I had to use the moonlight alone.”

World Press Photo awarded prizes to 41 photographers from 21 countries in this, its 59th contest. Its foundation is an independent, non-profit organization based in Amsterdam, with support from the Dutch Postcode Lottery.