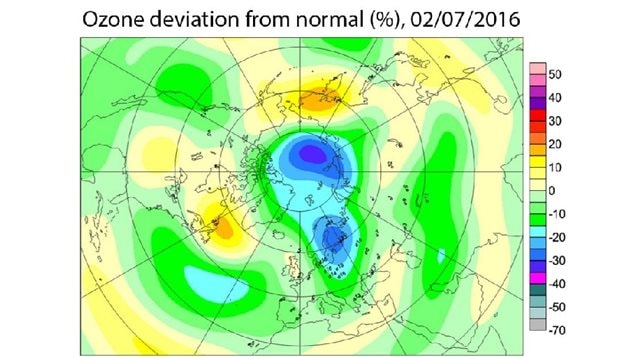 Record ozone loss over the Arctic?

Ozone is a colourless, odourless gas, and at ground level is a health hazard, but in the stratosphere it plays an important role in shielding the Earth from ultraviolet rays from the sun.

Without the mitigating factor of ozone to absorb UV rays, the results include more skin cancers, more eye problems such as cataracts in humans, reduced crop growth and other damage to plants, and damage to plankton in the sea, the vital first step in marine food chains.

Scientists first began noticing trouble with the ozone layer in 1957 in the Antarctic. Through the 1970’s to late 1980’s more sophisticated technologies showed the extent of ozone loss and also into the factors causing it including natural factors but also the rising presence of man-made chlorofluorocarbons (CFC), hydrochloroflourocarbons (HCFC, freon, halons, and other chemicals.

These were and are still in many cases common in a number of applications such as refrigerants, and propellants, carbon-tetrachloride, etc.  Released at the surface they are carried high into the stratosphere where they chemically recombine and breakdown the ozone molecules.

On average, a single chlorine atom is able to react with 100,000 ozone molecules before it is removed from the catalytic cycle.

To stem the destruction of this important “covering”, the 1989 the Montreal protocol called for the phasing out of many of the chlorine chemicals but as they have a long atmospheric life, they have continued and will continue for decades to come, to eat away at ozone.

There has been record cold in the Arctic stratosphere about 10-35 kilometres altitude and that has helped release more ozone destroying chemicals.  Quoted in an article in Science on Feb.10, Markus Rex, an atmospheric chemist at the Alfred Wegener Institute in Potsdam, Germany said,  “This winter has been stunning. By next week, about 25% of the Arctic’s ozone will be destroyed,”.

The polar vortex over the Arctic has been particularly strong this year allowing for the condensation and formation of iridescent clouds of nitric acid high in the Arctic sky.

Sunlight acts as a catalyst on the chemical reactions and right now it’s mostly dark over the Arctic. Even with the current low levels of light, a huge hole has spread across most of the polar area.  If the polar vortex persists with the arrival of more sunlight as spring approaches, it will further destroy ozone.

There has been concern on what that might mean to plankton levels ins the Arctic and the effect that might have on the marine food chain for example.

The strong polar vortex this year has reached far into southern Canada and scientists say they just can’t predict what might happen at this point.

The highest previous record of ozone depletion was in 2011, when 80 percent of ozone over the Arctic was destroyed.  If the vortex and cold continues with the arrival of more sunlight which will exacerbate depletion, scientists say this year could see a new record level of ozone destruction.