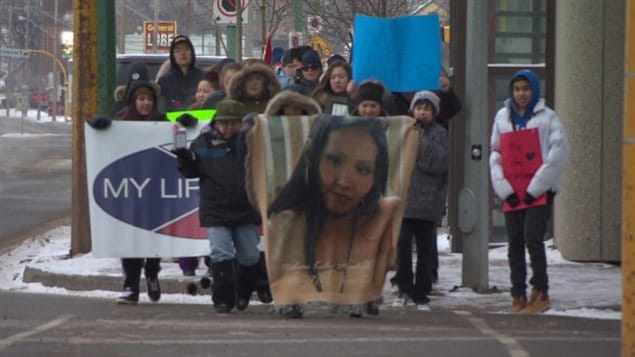 This vigil on Feb. 14, 2016 marked one year after the death of Nadine Machiskinic, found at the bottom of a hotel laundry chute. It was one of innumerable vigils about murdered and missing indigenous females.
Photo Credit: CBC

Funding of $100 million has been committed by the province of Ontario to prevent violence against indigenous women and to reduce its impact on those around them. The provincial government is not waiting for an upcoming national inquiry in the high number of missing and murdered indigenous females before acting on the issue.

Ontario’s indigenous women are three times more likely to be murdered than are other women, notes a news release. Nationally, a cabinet minister has said the number of murdered and missing aboriginal females could be as high as 4,000 but the figure is difficult to pinpoint. Indigenous people have said police do not always investigate such cases, sometimes calling them suicides instead.

Ontario announced it will spend $100 million over three years on new police training, support for children and families, strategy to prevent human trafficking, to raise awareness, and improve the collection of information.