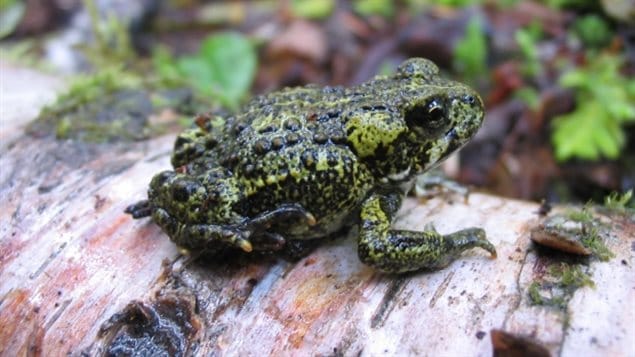 The western toad is listed as a species of special concern. A proposed logging operation threatens its habitat in the BC interior
Photo Credit: Mark Thompson

Jobs vs nature: a BC fight

A fight is dividing a small town in the interior of British Columbia.

The fight is over toads, and logging.

The provincial government has approved logging near the small Summit Lake, a few kilometers south of the town of Nakusp.

That lake is the core habitat of the “western toad” which has been listed federally as a “species of special concern”.

The conflict is between local residents who want to save the toad, and those who are concerned about maintaining forestry jobs.

Every year over a million toadlets travel across a busy highway into a forested area where they forage for about four years as they become adults and then returning to Summit Lake to breed.

Many consider this to be among the greatest animal migrations in the world.  The province spent hundreds of thousands of dollars to build a special “migration” tunnel under the highway to help protect the toads.

Road building had begun for logging but was blocked at least temporarily by locals.

Local biologist Wayne McCrory with the Valhalla Wilderness Society, said in a  press release, the “best practices” logging guidelines for toads have too many uncertainties.   “Claims to log and maintain core toad terrestrial habitat for Summit Lake are on very shaky ground. For one thing, no one knows exactly where the one million or more toadlets that just migrated into the areas to be logged are actually spending the winter hibernating”.

He adds, “The best way to protect this provincially significant population is not through questionable logging practices but through expanding the current proposed Summit Lake Park to include the core forested toad habitats on the mountain. All of Summit Lake and the lower south side are already approved for park expansion. Why not include the core critical toad habitat on the mountain as well?”

Forest minister Steve Thompson has  expressed confidence the migration route will be protected, while the company operating for NACFOR (Nakusp and Area Community Forest) says it will minimize road construction and disturbance. Their website says they have worked with experts to ensure responsible logging.

The village of Nakusp which owns NACFOR is moving ahead with logging of seven cutblocks in the toad habitat once access roads have been built.

The BC government’s Management Plan for the Western Toad recommends that as much forest habitat as possible be maintained “adjacent to breeding sites to allow for hibernation, foraging, and other essential life functions.

“What Nakusp residents are asking for is responsible logging,” said local resident Debbie Pitaoulis in the Valhalla Wilderness press release. “It isn’t responsible to log in the core habitat of the western toad. What is tragic is that the latest and largely successful toad tunnel inadvertently forces the toadlets into an area that is going to be logged – like cattle going into the chute.”

For the past five years there has been an annual Toad Festival at Summit Lake, where hundreds of volunteers carry toadlets cross Highway 6 so they won’t be squashed by cars. The numbers of toadlets are so great that when they travel, they look like a moving carpet.

British Columbia is one of just two provinces in Canada, the other being Alberta, that has no provincial endangered species legislation. BC has the most biodiversity in the country, with over 1,500 species at risk.

One comment on “Jobs vs nature: a BC fight”