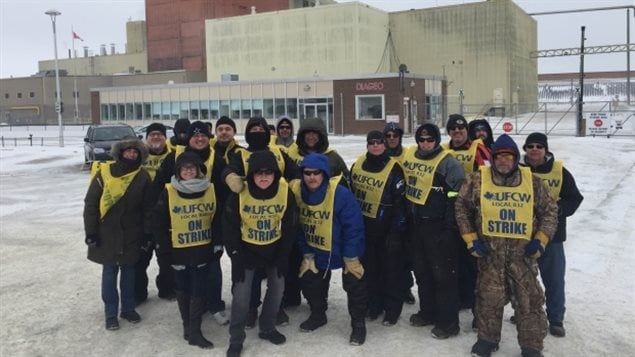 Crown Royal may be getting a little harder to get, and particularly that much sought after Northern Harvest Rye, that’s produced at the plant in Gimli, Manitoba, as workers their are on the picket lines.

A little more than a month after the 53 employees voted unanimously in favour of a strike they took to the picket lines on Saturday morning.

“Our members go to work every day with the mindset that they are making the world’s greatest whisky,”

According to statement from UFCW Local 832 president Jeff Traeger, “Our members go to work every day with the mindset that they are making the world’s greatest whisky,”

Since being pronounced “a masterpiece” by renowned British whisky expert Jim Murray on November 20, 2015, bottles of the special blend have been disappearing off shelves in Manitoba and across Canada whenever liquor stores can replenish their stock. Murray named it 2016 Whisky of the year.

“The company is doing very well selling this product, as well as Crown Royal, and Diageo is a world organization that sells all kinds of premium liquors around the world and they make a lot of money,” Jeff Traeger told CBC Manitoba.

The workers want health and welfare benefits, as well as wage increases and more vacation time. They’re picketing now in shifts of 25 people at a time.

Gimli is about 90 kilometres north of Winnipeg in Manitoba. It’s -3 degrees celsius there today.

When contacted for a comment a spokesperson for Diageo North American replied with this statement:

“We are disappointed with the result of the vote and the decision by the union to proceed with a strike as we believe that the offer made by Diageo was a fair one.  The Company’s offer included wage increases of over 4.5 % over the course of a three-year collective agreement, together with pension, benefit and vacation improvements.  Diageo is committed to the negotiations process and we hope that the Union will decide to return to the bargaining table soon. We have robust business continuity plans in place, and we do not expect the work stoppage to affect our ability to supply Crown Royal Canadian whisky to the market.”