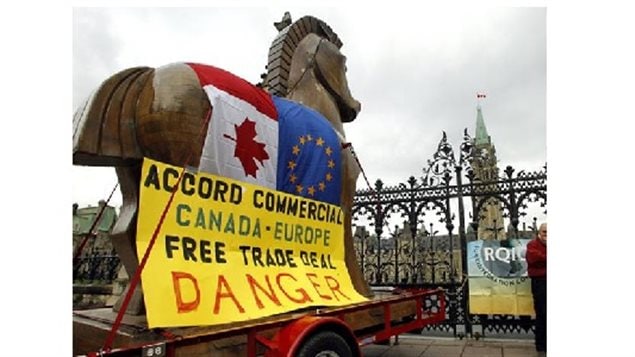 Oct 2011: Anti-CETA protests in Ottawa use a large mock-up to say the trade deal is a *trojan horse’ with hidden dangers.
Photo Credit: Council of Canadians

The international trade deal between the EU and Canada is known as CETA or Comprehensive Economic Trade Agreement.

Begun under the previous Conservative government in Canada, it has continued with the present Liberal government and is moving closer to implementation.

The Council of Canadians, is a non-profit group advocating on social and political issues such as clean water,  fair trade, green energy, social programmes among others, including arguing against CETA.

Sujata Dey is the Trade Campaigner for the Council of Canadians.

The Council of Canadians deplores the fact that the CETA international trade deal, like many others, was negotiated in secret to a large extent, with little or no consultation with the public.

On their website, they write, “CETA is a way to further deregulate and privatize the Canadian economy while increasing corporate power and undermining Canadian and European efforts to address the climate crisis.”

Sujata Dey says that one of their concerns involved the Investor State Dispute Settlement (ISDS) which she says enables international corporations to sue governments for policies they say infringe on, or prevent, their profits. She says that because it is very costly to defend against such claims, governments may decide to simply not proceed with certain policies such as environmental or social protection for their citizens, or  favouring domestic suppliers and employees.

To address this concern, a modification involved the creation of an investment court. While this avoids arbitration and potential conflicts of interest, Sujata Dey says this is merely window dressing and does not deal with the underlying concern of granting enormous power to international corporations.

Other Canadian concerns include the eventual dismantling of Canada’s supply management system and other protections for farmers. They also say that the deal provides other advantages to European competitors as European farmers are highly subsidized whereas Canadian farmers are not.

Sujata Dey admits that the current government, which has called this a “gold plated trade deal” is not likely to change its position. She says that for opponents of the deal,  the hope now lies in resistance in Europe.