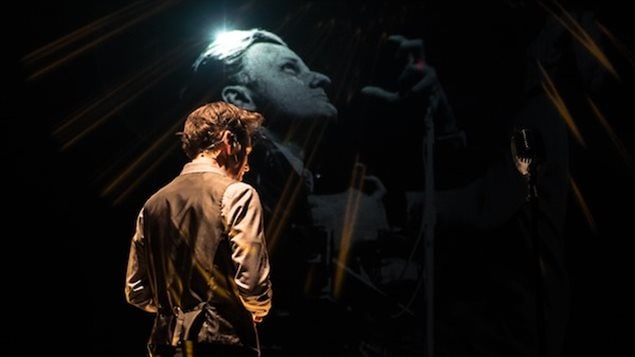 Rick Miller in the one-man tour-de-force that is BOOM! The play opens in Montreal at the Segal Centre on March 24th, 2016

BOOM!  It’s the title of the one-man extravaganza written and performed by Rick Miller. It’s based loosely on his parents experience, between Montreal and Toronto, featuring an immigrant from Vienna and a draft dodger escaping the Viet Nam call of duty in the United States. Rick Miller says the work was motivated by a desire to understand the generation before him.

“it’s about today, but looking through the lens of yesterday”

Rick Miller, who was born in 1970, says “it’s about today, but looking through the lens of yesterday”. Miller plays 100 characters in 100 minutes and covers the time between the atomic bomb dropping and Apollo 11 lifting off. “It was an attempt to understand where I come from, the DNA of our culture, and to understand really, the history of rock and roll, which has fueled a lot of my life” he says.

BOOM! is the most-presented new play in Canada this year with over 200 shows to date. Following the Montreal run, the show will go to Winnipeg and Miller says plans are in the works to take the production to Australia and then to the United States.

There’s an educational link with Encyclopedia Canada and Kidoons making all of this entertainment and history easy to take for the next generation. And there’s a rather timely quality to the staging as the debate over the age of retirement in Canada is on again with the recent news that the new Liberal government’s first budget will re-establish it at 65, and not 67, as the previous Conservative government had decreed.

The “boomer’s as the demographic of the post-war era is known, are a huge segment of Canada’s population. They have dominated the social landscape in most places across the country, from swelling classrooms that had schools using portable units to house students until extensions could be built in the 1960’s, to the growth of universities and colleges through the 1970’s, culminating in the steady increase in housing prices as the women of that generation entered the workforce and double-income families became the norm in many places. Now as the boomers face their golden years, one of the wealthiest group of seniors ever, they are sure to leave their mark and redefine retirement.