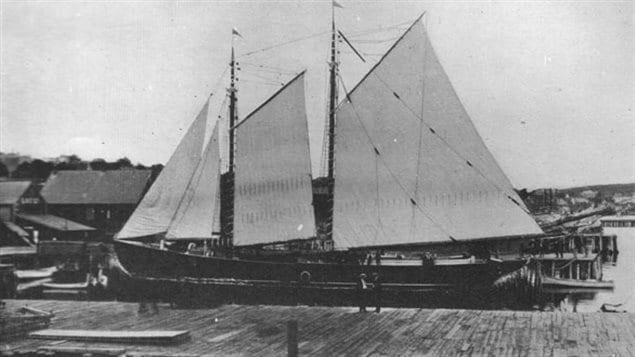 The Im Alone with her new set of sails. Built for the rum running trade, she brought untold tons of alcohol to a thrrsty prohibitionist US, until she was illegally sunk on the high seas by an apparently frustrated US Coast Guard captain.
Photo Credit: Newfoundlandshipwrecks.com

The high-seas sinking of the “I’m Alone”

In 1919, America had succumbed to the concept of prohibition, banning the manufacture, sale, or consumption of alcoholic beverages.  The folly was that vast numbers of the American population still wanted to drink, and there arose a large number of illegal groups and individuals, including deadly gangs, only to eager to supply it to them at great risk but at enormous profit.

Because there was so much “booze” still getting in to the US, the government even pressured Britain and Canada into treaties to prevent illegal alcohol from leaving their shores for the US.

In the 1920’s a Nova Scotia registered schooner, the I’m Alone became very well-known to US authorities as a rum runner. The ship, captained by an experienced Newfoundland captain was able to escape and frustrate the US Coast guard chasers time and time again for six years

The I’m Alone, was not just a sailing vessel though, she was equipped with two 100-hp engines and a powerful radio. The radio was used to intercept Coast Guard messages and give the ship an advance warning of approaching Coast Guard intercepts.

The Captain of the ship was Jack Randell, a decorated veteran of the Boer War and who later had sunk two ships off the coast of Norway carrying war goods to the German army during the First World War.

At the time the international limit for authority of a nation was 12 nautical miles from the coast. But US laws said their officials could stop ships suspected of rum running if they were within one hour’s sailing from the coast. This of course caused some confusion, as different ships could travel at different speeds making the “one hour” rule rather nebulous and anywhere from 12 to about 20 miles.

“Do not allow the ship to escape”

Nevertheless, in the 1920’s many rum-runners would bring cargoes of alcohol and lie just inside American jurisdiction where they could escape out to international waters if a Coast Guard ship came within sight.  It was also where smaller swift boats from shore could come a few miles out come to meet them, get their allotment of liquor and race back to port.

Then on March 20, the Coast Guard ship Walcott lucked into spotting the notorious vessel which had so long eluded them. Several miles off the Louisiana coast, (the distance was disputed but apparently just inside US waters) the American  cutter USS Walcott hailed the I’m Alone.

The American ordered Randell to stop, which was refused, and the schooner headed further out into the Gulf with the Walcott in pursuit  Two hours later and very safely in international waters, the US captain was allowed aboard the schooner where he and Randelll talked. Randell then advising the American that the schooner was now outside US jurisdiction and had also not broken the Rum Running treaty between the US and Britain and therefore he would not surrender the ship.

The American returned to his cutter, and was advised from shore “under no conditions allow the ship to escape” and “use all force to seize her”. What followed was a further pursuit out into the Gulf of Mexico lasting  several days during which shots were fired at the schooner doing little damage in the choppy seas and because the cutter’s deck cannon jammed.

Then early on the 29th, a second cutter, the USCG cutter Dexter came on the scene.

It was commanded by a frustrated captain who was angered that the I’m Alone had escaped from him in the past.  He ordered Randell to stop. When Randell refused the American opened fire with rifles, machine guns and the deck cannon destroying the masts and rigging, with many shells and bullets tearing through the hull while the crew huddled in the aftmost portion of the deck.

The I’m alone, estimated to be about 215 miles or approximately 321km from the US coast, was holed and began sinking by the bow.

One crewman drowned while the others were rescued and placed in leg irons. Later on the deck of Dexter, Capt Randell was able to read signals between the two US ships as they discussed how to explain the deadly attack well outside US waters.

The fact that the American ships had attacked and sunk another ship, a British flagged (Canadian) vessel, in international waters caused outrage in Canada and in England and raised eyebrows in the shipping industry.

Canada sent a diplomatic protest to the US over the incident

Randell and the crew were initially taken to New Orleans  where the British government posted bail a few days later.  On April 10th smuggling and conspiracy charges against Randell were dropped, but the issue of the illegal attack dragged on for years.

Canada and Britain said if it was determined to be a government attack, it was an act of war, and if solely the US Captain’s action, then an act of piracy. The diplomatic and legal dispute eventually forced the case into international arbitration by a commission.

In its final report the commission wrote.

“It will be recalled that the I’m Alone was sunk on the 22nd day of March, 1929, on the high seas, in the Gulf of Mexico, by the United States revenue cutter Dexter. By their interim report the Commissioners found that the sinking of the vessel was not justified by anything in the Convention. The Commissioners now add that it could not be justified by any principle of  international law.”

The attack on the high seas, death of a seaman, and international embarrassment to the US, only helped to push the US to eventually end the growing unpopularity of prohibition which was repealed a few years later in 1933.

The legal case dragged on until 1935 when the international investigation commission released its decision. The US was ordered to make an official apology to the Canadian government and pay Canada $25,000 for insult and property loss. Another $25,000 was awarded to the crew. Randell received $7,900, the drowned crewman’s widow $10,000, and the remainder divided among the other crew members.

Randell returned to sea, serving briefly in WWII. He died in 1944.

The Dexter captain, Alfred Powell in spite of his actions which caused an international diplomatic row, remained with the Coast Guard, served in the U.S.Navy in WW-II but was severely burned on a troop transport vessel in 1942. He retired in 1944, and died in 1980

The USCGC Walcott was paid-off in 1935 and seems to have disappeared from the record. The infamous USCGC Dexter was transferred to the Navy, then sold to the public, eventually becoming a party boat, scuttled in Lake Michigan in 2010.

For a few years after the sinking, bottles of liquor were reported to wash up on the shores of Louisiana. The story was put to music by the Canadian group the Irish Rovers on their album “Tall Ships and Salty Dogs” in 1979 (*see youtube video below)