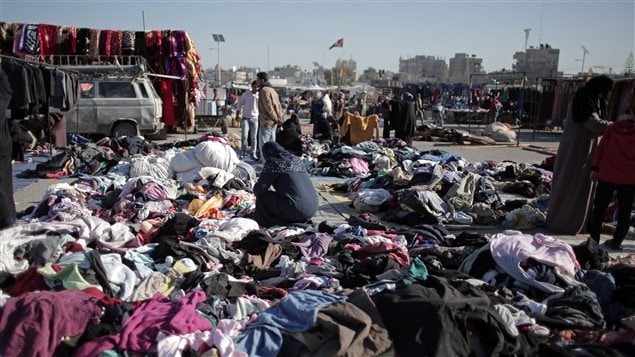 On Feb. 15, 2016 a Palestinian woman scours a used clothing market in Gaza. Demand for clothing is said to be an indicator of poverty and unemployment levels.
Photo Credit: Khalil Hamra/AP Photo/Khalil Hamra

On a visit to Ottawa, a top UN official urged Canada to restore funding for the UN agency that provides relief to Palestinian refugees, report the Globe and Mail newspaper. In 2010, Canada’s Conservative government cut all of the $30 million in annual funding to the UN Relief and Works Agency (UNRWA) because of its alleged links to Hamas. It considered Hamas to be a terrorist group.

Filippo Grandi says that Hamas is the de facto authority in Gaza and that any relief organization must work with local authorities in order to deliver aid. It does not mean it recognizes them politically.

Grandi was head of UNRWA for almost 10 years. Although he is not involved with it any longer, as the UN High Commissioner for Refugees, he met with Canada’s Minister for international development, Marie-Claude Bibeau and had occasion to talk about UNRWA funding.

Bibeau said the newly-elected Canadian government is considering restoring UNRWA funding, but no decision has yet been made.

(with files from Canadian Press and the Globe and Mail)