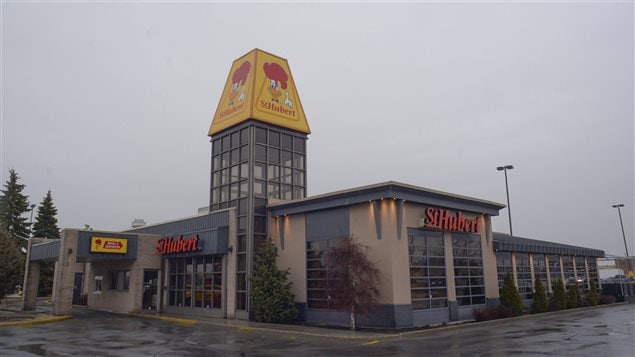 A St-Hubert restaurant is seen in Montreal Thursday, March 31, 2016. The Quebec-based St-Hubert restaurant business has agreed to be acquired by the owner of the Swiss Chalet chain for $537 million. In addition to 117 restaurants, Cara Operations Ltd. will acquire two food manufacturing plants, two distribution centres and a real estate portfolio.
Photo Credit: PC / Peter Mccabe

So much so the Léger family has been doing brisk business feeding Quebeckers their iconic barbequed chicken, fries and coleslaw salad ever since they opened their first St-Hubert restaurant in Montreal in 1950s.

The St-Hubert chain has since grown to 117 restaurants and two food manufacturing plants employing about 10,000 people. It has also become one of the most successful made-in Quebec brands, carving out a special place in the hearts many Quebecers.

So when Jean-Pierre Léger announced Thursday morning, that he’s selling the entire family-owned Groupe St-Hubert company to Ontario-based Cara Operations Ltd., whose restaurant brands include Swiss Chalet, Harvey’s and Milestones, it was sure to ignite some passions in Quebec.

“It’s a sad day for Quebec,” the leader of the separatist Parti Québécois (PQ) Pierre Karl Péladeau tweeted on Thursday morning soon after news broke of the chain’s $537-million sale to Cara.

“After Rona, it’s as if Quebec is for sale under Philippe Couillard,” the PQ’s Bernard Drainville said on Twitter.

Speaking to reporters in Montreal at the St-Hubert restaurant beside Montreal’s Bell Centre, home of the Montreal Canadiens hockey club, Léger said he is keenly aware of his company’s place in the cultural landscape of the province. The 70-year-old said he agonized over what to do with the chain when his two daughters decided not to carry on the family business.

He looked for potential buyers within Quebec, but couldn’t find anyone he felt comfortable selling the business to, Léger said.

“My main concern was to ensure the long-term existence of the company,” he said. “This deal was the one that assured that.”