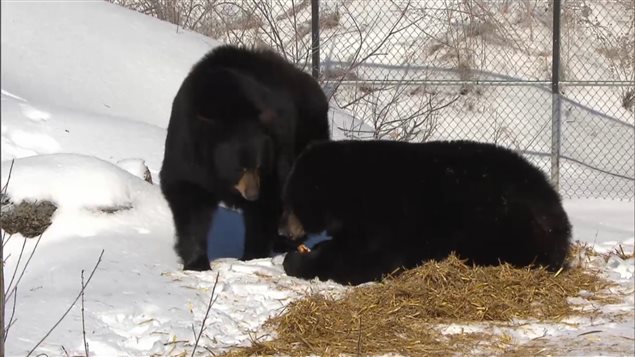 Juno, the orphan bear, and Genie, who was born in a zoo, are safely enclosed at the Ecomuseum near Montreal. They and bears in the wild are coming out of hibernation and are hungry.
Photo Credit: Ecomuseum

It’s spring in Canada and bears which hibernate during the long winter months are waking up and coming out of their dens. They are usually pretty hungry upon waking and that means it’s time to take special precautions in places like Kamloops, in the western province of British Columbia.

Kamloops has a wildlife park east of it that is home to cougars and bears, and sometimes the animals wander into town. The city has a special bylaw and programs to minimize encounters between bears and people.

Residents must put out their garbage before 7am on pick-up days or face a $100 fine. Conservation officers are helping to introduce bins which are specially designed to be bear-proof. There is also a special program to educate residents to hide items which might be attractive to bears. These include pet food, barbecues with food scraps on them, and bird feeders.