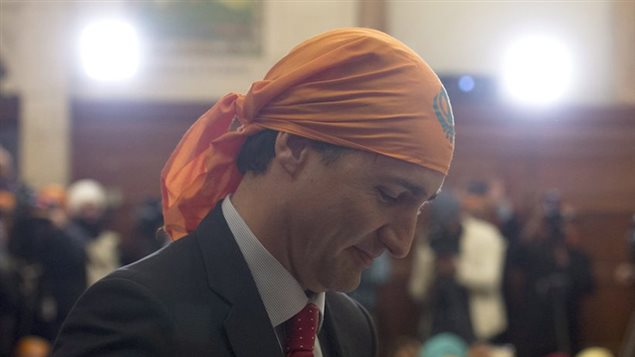 Komagata Maru apology from PM in May

The Komagata Maru incident, as it is known in Canada, is an ugly chapter in our history. Now Prime Minister Justin Trudeau announced, he will apologize formally on May 18, 2016, almost 102 years after the episode.

The Komagata Maru was the name of the Japanese ship that was docked in the Vancouver harbour in 1914. There were 376 passengers crowded on board, most of them Sikh, seekeing refuge in Canada. But they were rejected by the government at the time.

“on May 18th, I will stand in the House of Commons and offer a full apology for the Komagata Maru incident”

“The passengers of the Komagata Maru, like millions of immigrants to Canada since, were seeking refuge, and better lives for their families. With so much to contribute to their new home, they chose Canada and we failed them utterly,” Justin Trudeau said, in announcing the upcoming apology yesterday in Ottawa.

Former prime minister Stephen Harper apologized to the Sikh community in Surrey, British Columbia in 2008, but many Sikhs across Canada wanted a formal apology in the House of Commons.

It began in 1910, when the Dominion of Canada, passed an order-in-council which stipulated that immigrants coming to Canada must do so by continuous journey. Gurdit Singh, in an effort to comply with the exclusionary policy, chartered the Japanese ship, the Komagata Maru, selling tickets for a continuous passage from the Punjab state in India, to Canada.

On May 23rd, 1914, the Komagata Maru sailed into the Vancouver harbour with 376 people aboard. The passengers understood that a 1908 provision demanding all “Asiatic” immigrants have $200 did not apply to them as they were British subjects. At the time, India was still a colony.

But the dominion government in Canada would not allow the passengers to disembark and the ship remained in the harbour for two months. When the government ordered the ship to sail in July, the hungry and neglected passengers took over the ship, refusing to leave.

On July 19, a confrontation took place when 35 special immigration agents and 125 Vancouver police officers tried to board the ship. They were beaten back and 30 people were injured.

On July 23, however, under the threat of Canada’s naval cruiser, HMCS Rainbow, the Komagata Maru was escorted out to sea and returned to India. Upon their return to India, 19 people were shot dead as they disembarked from the ship, many others were imprisoned.

“As a nation, we should never forget the prejudice suffered by the Sikh community at the hands of the Canadian government of the day. We should not and we will not,” he said.

“That is why, next month, on May 18th, I will stand in the House of Commons and offer a full apology for the Komagata Maru incident.”