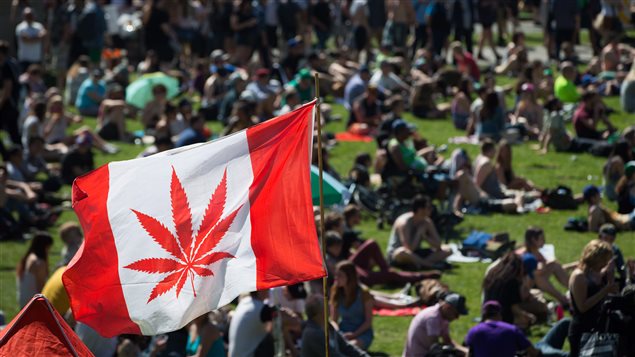 A marijuana leaf substitutes for the maple leaf on a flag flying at the 4/20 cannabis culture celebration in the western city of Vancouver on April 20, 2016.
Photo Credit: Darryl Dyck/Canadian Press

Marijuana should be sold not for profit: professor

Canada’s government will table legislation to legalize the recreational use of marijuana early in 2017. The health minister says the law will ensure the drug is kept away from children and it will address the negative consequences of drugs and related criminal activity.

Experts warned government officials to legalize cannabis cautiously, and to not repeat mistakes that have been made in the U.S. One such mistake was maintaining “hyper punitive prohibition” and then “lurching” to the most extreme commercialization, said Mark Kleiman, a professor of public policy at New York University, speaking at an international conference on cannabis policy on April 17, 2016 in New York.

Marijuana should not be sold for profit, he argues, adding the 20 per cent of people who use cannabis most often consume 80 per cent of the product and most of them have a problem.

“So if you’re a profit-making business trying to ask how can we make money selling cannabis, the answer is ‘we have to create, identify and serve people with drug problems,’” says Kleiman.

“If you’re in the drug-selling business where the drug is called cannabis or alcohol, substance abuse disorder isn’t a diagnosis, that’s your target demographic.

“And so the commercial interest of the for-profit industry is directly, diametrically opposite to the public interest.”

Instead of leaving the market to commercial interests, Kleiman suggests the government allow people to grow their own, set up cooperatives, restrict the marketing to non-profits or create a state-owned monopoly.

Prices should stay high to discourage use by young people and heavy drug users, he says, and anyone selling marijuana should be able to provide sound advice on avoiding substance abuse.

Before winning the federal election on October 15, 2015, the Liberal Party vowed to legalize marijuana with the stated goals of ensuring public safety and public health, rather than profit. Kleiman says those are good goals. There will be much debate about the details.

Currently, marijuana for medical purposes can legally be bought by mail from suppliers who are licensed by government. However, many storefront operations have popped up across the country and are tolerated in several jurisdictions. A city councillor in Toronto has complained. 135 medical marijuana dispensaries were ordered closed in Vancouver last year.