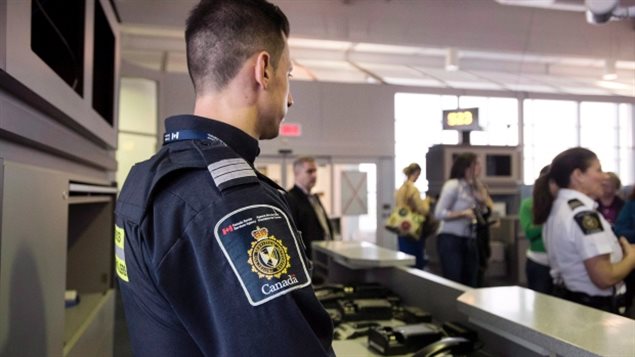 Border security agents now have access to the Canadian Police Information Centre database at primary inspection points. Roughly 1,800 people with outstanding warrants have been flagged since the database was implemented a month ago
Photo Credit: Darren Calabrese/Canadian Press

In the past few months controls for people entering Canada have been tightened up.

This began last last year when a new system was instituted in Canada which follows an American system for screening air passengers. The new system uses an analytics programme which relies in part on airline provided information on passengers names, birthdate, citizenship, and other details.  Using this data they single out passengers deemed as higher “risk” and who would be subject to additional attention during customs inspections.

In the first few months of operation some 2,300 passengers were given closer examination.  There was no clarification of whether this was an increase over previous numbers, nor of how many were detained or turned back.

While frontline CBSA agents often had little information on people they were letting in to the country, perhaps surprisingly US border agents had long been given access to the CPIC system and were screening all entrants from Canada to the US.

Since the new frontline access was provided CBSA agents a month ago, they have flagged some 1,800 people for outstanding warrants.  People detained thanks to the new system include an arsonist in a fatal fire, charges of fraud, and sexual assault.

While many were for minor infractions, such as unpaid fines, there have some cases where people facing more serious charges have avoided being caught for many years, including those charged with fraud, sexual assault, and an arsonist in a fatal fire.

In some cases they were able to leave and re-enter on several occasions without fear of being caught.

Now however, with access to police records, they are being nabbed when trying to re-enter Canada

A Senate report of June 2015 says the CBSA database showed there were 44,000 people who were in Canada but were “inadmissible”. Many were rejected refugee claimants ordered out of Canada, but the agency in many cases couldn’t account for their whereabouts. At the time the report asked  why people who are believed to be inadmissible are being permitted to enter Canada, and were told that CBSA powers were limited.

The report also noted that about 145 people were believed to have left Canada to fight with jihadist terrorists and about 80 have returned.

In its recommendations the Senate had said CBSA frontline access to the CPIC data was needed.