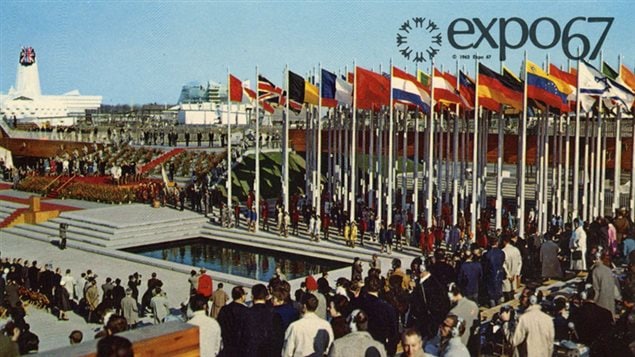 The year 1967 was Canada’s centennial. The anticipation of national celebrations had been building for the past couple of years, and everyone was waiting for one of the major events, the opening of the world fair, Expo 67 in Montreal.

The event had been originally scheduled for Moscow but when Russia cancelled, the event was transferred to Canada in 1962.

This presented a unique opportunity and incredible challenge; to create an event worthy of Canada’s centennial, and to impress the world.

The theme of Expo-67 would be “Man and his World” (taken from a St Exupery novel “terre des hommes”) and while that was the main theme there were several sub-themes depicted in various ways and displays throughout the site, such as  man and his health, man the explorer (with its own sub-themes), man the creator, man the producer, man in the community, man the provider, labyrinth, and Habitat -a housing complex.

With ground-breaking on August 13, 1963, time was short. Indeed computer projections said the envisaged project could not be completed in time.

Yet in less than four years a massive amount of work had been undertaken including vastly increasing two small islands in the middle of the St. Lawrence  and building another. An elevated rail line built from Montreal to the islands, and mini-rail transport all around the sites.

Some 25 million tonnes of fill were used, most coming conveniently from the construction of Montreal’s subway.

Other countries and industries became interested as well with 62 nations and many industries coming on board, and news began to spread of the around the clock work and excitement building over what promised to be a truly spectacular site and event.

Expo 67, opened to great fanfare and official speeches on this day, April 27, 1967, and by the third day established the record for single day attendance for a World’s Fair with 569,500 visitors from Canada and virtually every other country around the world.

By the time it closed in October, it was and is considered to be the world’s most successful such event.

The site continued in a lessened fashion for several more years.

However, the buildings were not designed to last and some were removed shortly after the event while others that remained slowly deteriorated and were taken down a few years later, until the site was basically deserted. It has since become mostly park and recreational land

Of what little is left, Habitat is one of the remaining “structures” the various housing units are considered a prime address and the French and Quebec pavilions have been converted to a huge full time casino. The amusemant area known as La Ronde continues as a summer area, but is owned now by an American amusement firm, Six Flags.