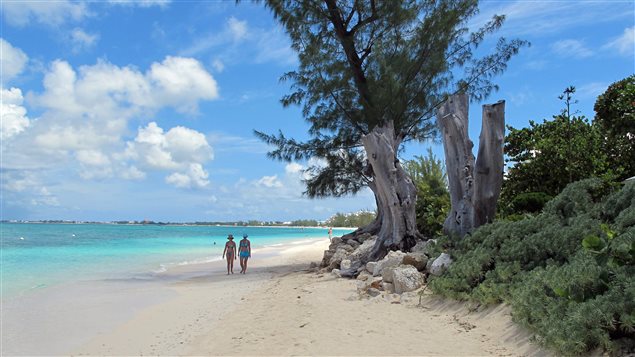 Cayman Island is said to have been the favourite tax haven for Canadian corporations in 2015.
Photo Credit: David McFadden/ AP Photo/Aug. 3, 2012

A citizens’ watchdog group says Canadian corporations have put at least $270 billion into tax havens over the past 15 years, most of it untaxed. Canadians for Tax Fairness used government statistics to determine that $40 billion flowed into the top 10 tax havens in 2015 alone. That was up 17 per cent over the year before.

Tax havens in the Caribbean are popular

The places receiving the biggest investments last year were Cayman Islands which got $13 billion, Barbados with $9 billion, almost $8 billion in the Bahamas and the money sent to Switzerland increased by 58 per cent, says the group.

The top ten cited does not include Panama or the British Virgin Islands, said the head of Canadian for Tax Fairness in a news release. Nor does it “capture all the investments made by private individuals, much of which is done to illegally evade paying taxes.”

Offshore accounts are not illegal, but Canadian residents are obliged to report and pay taxes on any income from offshore investments.

While the most recent Canadian government budget set aside $444 million for auditing and enforcement regarding tax havens, the group says the government should go beyond that and tighten up corporate tax rules.

“There is a lot of money that could be recovered and invested in Canadian infrastructure, public services and all the jobs and economic growth that real investment would generate,”  reads the news release.

Funding cuts to public services and failure to maintain infrastructure have become ubiquitous in Canada.