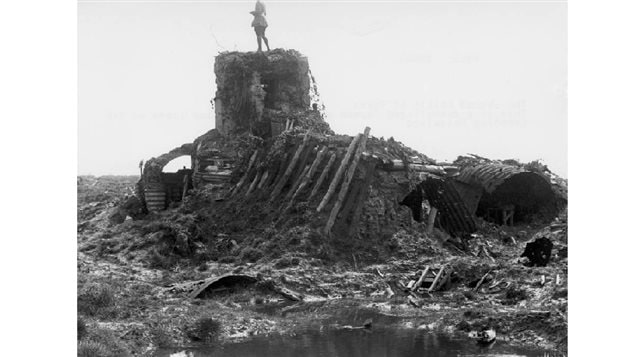 Camouflaged German observation post at approximate position of 8th Canadian Battalion H.Q. on April 22, 1915, during Second Battle of Ypres, By this time , the countryside was devasted by millions of artillery shells fired by both sides near Ypres since 1914. Losses were also staggering on both sides with years of slaughter yet to come
Photo Credit: Archives Canada MIKAN no. 3397986

Arguably the most famous poem of the First World War, “In Flanders Fields”, was penned by a tired and distraught Canadian doctor on this day, near a field hospital in the midst of a terrible battle on May 3, 1915.

Formerly an artillery student, medical student and then doctor, John McCrae had been a Canadian artillery officer leading a battery with the Canadian Field Artillery in the Second Boer war where he served from 1900-1902.

There he became greatly disturbed by treatment available to the sick and injured at the time.

In 1904 he left the military to set up his own practice but also to continue his medical studies in Canada and Britain.

When war broke out again in 1914, now an accomplished doctor and specialist, and now in his forties, McCrae volunteered for duty and was back in uniform. In the spring of 1915, he found himself in the mud and and horrors of the Second Battle of Ypres, surrounded daily by the dead, the sick, and the horrifically maimed.

Now with the rank of Major, and a senior medical doctor, he was second in command of 1st Brigade, Canadian Field Artillery with the guns stationed on the west back of the Ypres-Yser Canal about two kilometres north of Ypres.

The brigade had arrived at the position on April 23. He would later write to his mother, \

“The general impression in my mind is of a nightmare. We have been in the most bitter of fights. For seventeen days and seventeen nights none of us have had our clothes off, nor our boots even, except occasionally. In all that time while I was awake, gunfire and rifle fire never ceased for sixty seconds ….. And behind it all was the constant background of the sights of the dead, the wounded, the maimed, and a terrible anxiety lest the line should give way.

(Prescott. In Flanders Fields: The Story of John McCrae, p. 98)

On May 2nd, a Sunday, his good friend and former medical student, 22 year old, Lt Alexis Helmer,  an officer in the 2nd Battery of the 1st Brigade, left his dug-in protected position and was killed instantly by a large German shell.

During a lull in the battle, bodies would be collected and buried in a nearby temporary gravesite. On each lull, the number of white crosses would increase as more dead were buried. The poppies had already begun to appear in the region, aided by the chalky soil that had been churned up by the massive, incessant bombardment.

In Helmer’s case, his body parts were gathered up and quickly buried in a makeshift grave with a simple wooden cross. (Helmer’s actual grave has now been lost and his name inscribed on panel 10 of the Menin Gate Memorial to the Missing.)

Without a chaplain available, a distraught McCrae  himself presided over the funeral.  Later he wrote the short poem, according to some accounts, within a matter of minutes.

It was May 3rd, Monday, 1915.   Initially he didn’t think that much of it, and apparently threw it away.

RCI-the woman who may have saved the poem

However on the insistence of others it was enventually sent first to Spectator magazine, which rejected it, but then to the extremely popular Punch magazine in England where it was published in December that year.

At the same time melancholy and patriotic, it was an immediate success, and went on to be used in to be used in recruitment posters and was widely reprinted in the allied countries.

Post war, it was the inspiration for the now widespread use of representations of red poppies in commonwealth countries as a symbol of remembrance on November 11th when national ceremonies are held to pay homage to the fallen of wars and conflicts.

Lt Col McCrae himself did nor survive the war.  Physically weakened by the emotional and physical stress of almost uninterrupted long hours treating sick and wounded,  he could not fight off the pneumonia he caught, and succumbed on January 28, 1918.

YouTube Flanders Field-and For the Fallen- recited by Michael Haynes