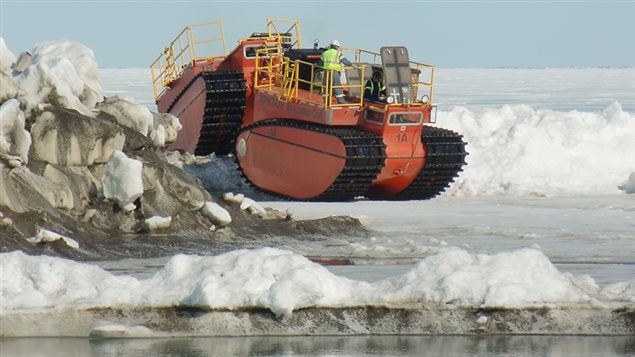 It has an eerie resemblance to a WWI tank.

But the bright-orange amphibious vehicle designed and built by the British Columbia-based Arktos Developments Ltd. can navigate terrain that no other vehicle can.

Its hollow dual hulls and spikecovered tank treads allow it to manoeuvre over deep mud, ice and water.

Its unique design allows it to be used on various assignments from the Arctic ice floes to the Caspian Sea in Kazakhstan and the shallow waters of the Bohai Delta in China, said Darlene Seligman, vice president of Arktos Developments Ltd.

(click to listen to the interview with Darlene Seligman)

The company’s booth at the CANSEC 2016 trade show in Ottawa sparked Canadian Defence Minister Harjit Sajjan’s curiousity as he toured the convention fresh from a trip to Yellowknife where he discussed Canada’s defence needs in the Arctic.

“They go from 40 below to 40 above and deep mud because of their amphibious ability,” Seligman said speaking over the din of Canada’s largest defence and security products show floor.

The articulated vehicle has two drive systems – a track drive and water jet drive – that allows it to climb vertical steps such as multi-year ice flows from deep water, Seligman said.

The 32-ton vehicle can hold 52 people and they are built to lifeboat criteria.

“So this is a lifeboat that can go into ice,” Seligman said.

Twelve oil companies and the Canadian government pitched in to finance the creation of the craft, Seligman said.

The company’s first sale was to the Canadian Coast Guard, which planned to put them on board its ill-fated Polar 8 Project icebreakers. Although the Polar 8 Project was cancelled in 1990, Arktos has used the first model for demonstration, service work and testing ever since.

The Arktos evacuation craft were supposed to be used by the Canadian Coast Guard.

The company is now developing a smaller craft that can go on a transport plane like C-130 Hercules used by the Canadian military, Seligman said.

“We’re planning on having it available for search-and-rescue, disaster response, oil spill response, especially in the Arctic where the expected activity is going to increase,” Seligman said.

Its hermetically sealable composite hull allows it to preserve heat for a long time even if the craft runs out of fuel, she said.

“That’s another reason these vehicles are good for the Arctic,” Seligman said. “If they run out of fuel you would survive a lot longer in these vehicles based on their composite hulls: it’s like Thermos or a composite igloo.”