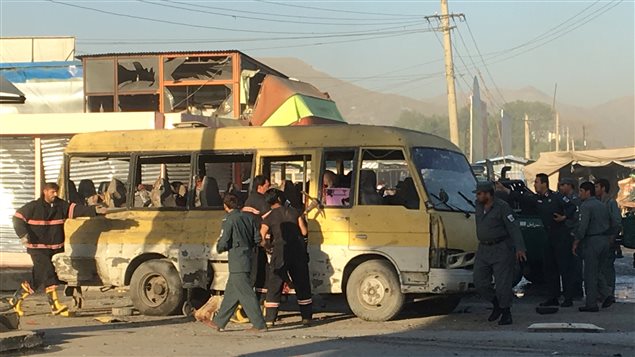 Police and fire fighters are seen at the site of the blast that killed Nepalese security guards working at the Canadian embassy in Kabul June 20, 2016.
Photo Credit: Reuters Staff / Reuters

Foreign Affairs Minister Stephane Dion has condemned an attack that killed 14 private security guards on their way to protect the Canadian embassy in Kabul on Monday.

“On behalf of the Government of Canada, I offer my sincere condolences to the families and friends of the Nepalese and Indian security guards killed, and I wish a speedy recovery to those who have been injured,” Dion said in a statement.

“Many of the victims have been part of our embassy family for years, and they will be remembered for their service in the protection of the men and women at the Embassy of Canada to Afghanistan.”

Today’s attack on security workers in Kabul is appalling & cowardly. Our thoughts are with the victims as we stand with the Afghan people.

The Afghan Interior Ministry described Monday’s attack as the work of a “terrorist suicide bomber.”

Abdullah Abdullah, the country’s chief executive, denounced the bombing as “an act of terror and intimidation.”

I condemn the terrorist attack on those traveling to their work places in Kabul this morning.This attack is an act of terror & intimidation.

The Nepalese Ministry of Foreign Affairs has confirmed the death of 12 Nepali nationals in the attack on the minibus and released their names, The Kathmandu Post reported.  Seven other Nepalese have been injured in the incident, according to the ministry. Their lives are not in danger.

The Associated Press reported from Afghanistan that there were conflicting claims of responsibility for the attack, and that they could not immediately be reconciled.

The private Nepalese guards are a common sight in Kabul where several embassies employ them to provide perimeter security.

With reports from The Canadian Press