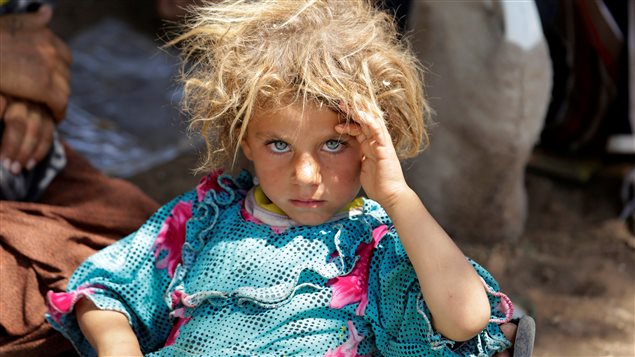 A girl from the minority Yazidi sect, fleeing the violence in the Iraqi town of Sinjar, rests at the Iraqi-Syrian border crossing in Fishkhabour, Dohuk province August 13, 2014.
Photo Credit: Youssef Boudlal / Reuters

Opposition urges Liberals to recognize other genocides committed by ISIS

The recognition of genocide committed by the so-called Islamic State in Iraq and Syria against the Yazidi minority by the Liberal government of Prime Minister Justin Trudeau last week was “too little, too late,” says an opposition member of parliament and former Canadian defence minister.

Conservative MP Jason Kenney says he wants Canada to extend the genocide recognition to other minorities targeted by ISIS as well.

(click to listen the full interview with Jason Kenney)

Last week, after months of pressure from the opposition and just two days after Liberal MPs defeated a Conservative Party motion to declare the campaign by ISIS against Yazidis and other religious and ethnic minorities in Iraq and Syria genocide, Foreign Affairs Minister Stephane Dion declared he was now convinced that the militant group is conducting genocide.

Dion’s about-face came following the release of a report by the UN Commission of Inquiry on Syria, which stated that “ISIS has committed the crime of genocide as well as multiple crimes against humanity and war crimes against the Yazidis, thousands of whom are held captive in the Syrian Arab Republic where they are subject to almost unimaginable horrors.”

“Minister Dion’s statement in Parliament only referred to the genocide against the Yazidi people, who are certainly suffering terribly from that genocide,” Kenney said in an interview with RCI. “But all other jurisdictions who have spoken to this recognize that there are more communities who are victims of this genocide, including the ancient indigenous Assyrian, Chaldean, Armenian and other religious and ethnic minorities.”

Last week, in an interview with CBC Power & Politics host Rosemary Barton, Dion defended the Liberal reluctance to recognize the atrocities committed by ISIS against Yazidis and other minorities without prior determination by relevant international bodies.

“There is something very important for human kind, it’s to protect the definition of genocide,” Dion said. “It’s not like the other atrocities and horrors that we need to condemn and to fight. It’s the intent to destroy groups: ethnic or religious groups. And this should be demonstrated by the highest rigour, by an independent investigation.”

Dion said once the UN Commission of Inquiry on Syria report came out with its report, the Liberals recognized the genocide and called on the UN Security Council to make sure that a full investigation is carried out and that the perpetrators are prosecuted.

Kyle Matthews, Senior Deputy Director of the Montreal Institute for Genocide and Human Rights Studies at Concordia University and a Fellow at the Canadian Defence and Foreign Affairs Institute, said Canada has to follow norms detailed by the Genocide Convention and the “Responsibility to Protect” doctrine, which came about thanks to past support from the Canadian government.

“It simply says you can’t just wait to the end, wait for the people to be killed and then prosecute the killers, but in fact you have to provide immediate protection,” Matthews said.

(click to listen the full interview with Kyle Matthews)

The question that is raised for Canada and its allies who also recognized the genocide is what will they do to help the Yazidi people, a persecuted Kurdish religious minority whose beliefs integrate elements of the ancient Zoroastrian religion as well Christianity and Islam, Matthews said.

“Will they deploy forces to the part of Iraq where the Yazidis are to physically protect them? Or will they provide refugee resettlement to those Yazidis who are displaced and have no hope,” Matthews said. “You have to do something that is going to protect them now, not four-five years down the road.”

Kenney said the most obvious and direct way to protect vulnerable communities in Iraq and Syria is by participating in the international combat operations against ISIS.

“While Canada does have military assets in Iraq, they are there to train Kurdish peshmerga, which is good and useful, but it’s not actually combat against the ‘genocidaires’ who are committing these crimes,” Kenney said.

Resettlement of Yazidi women and girls

On the humanitarian front, the Conservatives are urging the government to create a special resettlement program for about 400 internally displaced Yazidi women and girls who have been victims of sexual slavery, Kenney said. Several hundred of these women live in camps for internally displaced people in the Kurdish region of Iraq, near Irbil, he said.

During his tenure as immigration minister in the government of former Prime Minister of Stephen Harper, Kenney said he had set up a special program to bring to Canada thousands of Iraqi refugees from vulnerable minority communities.

However, targeted refugee resettlement programs can be a double-edged sword, said Matthews.

“I think there is definitely a good argument to be made to say that the resettlement of people that are facing genocide does kind of feed in to… it helps the objective of what the group is trying to do in the first place,” Matthews said. “It’s true, if you try to resettle Yazidis, you weaken the group, and you diminish the size of the group so they can’t fight back or protect themselves. It’s basically helping ISIS achieve its objectives because they want to wipe out all diversity in the Middle East.”

Kenney acknowledged that resettlement programs have to strike a very careful balance between protecting vulnerable minorities by offering them refuge in a safe country and unintentionally supporting campaigns of ethnic cleansing, designed to destroy and displace ethnic and religious minorities in the Middle East.

“On the other hand if there are people who have fled and are extremely vulnerable, they need special care like these Yazidi girls, I think there is a moral obligation to help some of them while trying to create a security environment that they can all return home,” Kenney said.

One of the ways Canada can contribute to security of these vulnerable communities is to help them train and equip their own security forces, Kenney said.

“When I was minister of defence last year, I was trying to explore ways in which Canadian Armed Forces could assist in training both Yazidi and Assyrian militias,” Kenney said.

Matthews pointed out that while Canada’s expanded training program championed by the Liberal government is going to help Kurds protect themselves, it’s going to do very little to help the Yazidis, most whom leave outside the Kurdish Regional Government, where the Canadian Special Forces trainers operate.

The minorities that have historically populated the Nineveh plain regions in north-central Iraq are uniquely vulnerable and they’re very concerned that when ISIS is pushed out of the region, there will be a struggle between the Iraqi government and its security forces on one side and the Kurdish Regional Government and its peshmerga troops on the other for effective control of the region, Kenney said.

“Both the Yazidis and the Assyrian minorities are concerned they will be completely marginalized in that internal Iraqi power struggle,” Kenney said.

The Yazidis also point out that when ISIS showed up in their indigenous homeland of Mount Sinjar region of north-western Iraq in August of 2014, that the Kurdish peshmerga forces initially melted away, leaving them undefended, Kenney said.

“I think there is a moral obligation for Canada and other countries to assist with what I would call a Nineveh Plains Protection Plan,” Kenney said. “I think part of that involves training and equipping at least a constabulary force of Yazidis and Assyrians so they can protect themselves in a very difficult environment, so they can go back to their ancestral towns and villages, and so that the ethnic cleansing is ultimately not successful.”