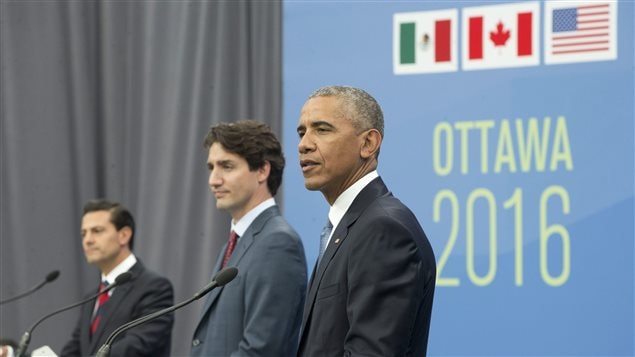 The leaders of Canada, the U.S. and Mexico put forward a united front against growing concerns over the rise of protectionism and anti-immigrant sentiment at home and abroad as they concluded their North American Leaders Summit.

“We know that trade leads to innovation and opportunities for communities, for individuals, for workers,” Trudeau said. “We need to make sure that we’re dealing with challenges and problems as they come up, and that’s where constant, engaged dialogue comes with positive outcomes.”

Trudeau cited the example of Canada and Mexico resolving major irritants in their bilateral relations by lifting Canada’s controversial visa requirement for Mexican nationals in exchange for Mexico removing its long-standing restrictions on Canadian beef exports as concrete examples of what can happen when leaders engage with each other.

“There will be people trying to get us all to turn inwards but the fact is our world is interconnected in so many ways that it is much better that we engage, that we work through our challenges together, because really that’s how we end up with the kind of growth that benefits our countries and our citizens,” Trudeau said.

Responding to a question about the rising tide of protectionism and anti-free-trade sentiments around the world but particularly in the United States where Republican presidential candidate Donald Trump has promised to build a wall with Mexico and tear up the North American Free Trade Agreement, Pena Nieto said Trump’s demagogic rhetoric would tear down what has taken decades to build, going so far as to compare these statements with the kind of rhetoric used by Adolf Hitler or Benito Mussolini.

The leaders pointed to the benefit of a regional free trade agreement with the United States as well as immigration between their countries.

On the environment issue, the Trudeau, Obama and Pena Nieto committed to a continent-wide goal of having 50 per cent of all electricity come from clean-energy sources by 2025; a reduction in methane emissions from the oil and gas industry of 40 per cent to 45 per cent; and cuts in two other potent greenhouse gases.

“Canada, the U.S., and Mexico will work together to implement the historic Paris Agreement, supporting our goal to limit temperature rise this century to well below 2 degrees Celsius, and pursuing efforts to limit the temperature increase to 1.5 degrees Celsius,” said the joint statement. “We reaffirm our commitment to join the Agreement this year, and call on all nations to support its entry into force in 2016.”