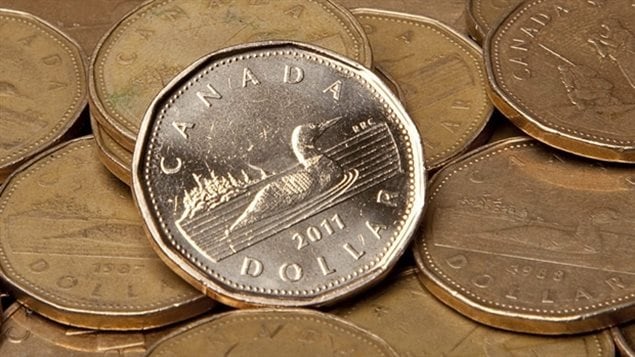 The Canadian one dollar ’loonie’. While this is the most commonly distributed image, as with all Canadian coins the image has changed for special editions. including designs for a Confederation anniversary, Remembrance Day, Peacekeeping, Olympics, and others
Photo Credit: Canadian Press File Photo via CBC

In 1986, the Canadian government announced it would be introducing a new one dollar coin the following year. This was proposed as a cost saving measure to replace the one dollar banknote.  It was argued that banknotes lasted only a couple of years, whereas the coins would last a couple of decades and save millions in printing costs.

There was also pressure from vending machine operators, transit companies and cities in relation to parking meters who wanted to raise prices in coin operated equipment.

With the new coin, the central bank would then phase out printing one dollar banknotes within the following two years.

It should be noted that Canada has had one dollar coins since 1935. Composed of a high silver content they were introduced to commemorate the 25th anniversary of the reign of King George V. Relatively large and heavy due to the silver, they were not particularly popular and as such were fairly rare in circulation. Because of the relative rarity, they were often simply kept as collectables when found,  thereby increasing their rarity in circulation.

The Canadian government was somewhat nervous about introducing a new dollar coin given the non-acceptance and failure of the Susan B. Anthony dollar in the U.S.

That silver coin was unpopular because it too closely resembled a 25-cent coin  particularly in weight, and colour.

The Canadian dollar would be the same size as the Anthony dollar to fit in American –made vending machines, but have 11 sides and be gold in colour to clearly distinguish it from a 25-cent coin, commonly referred to as a ‘quarter’.

The original plan was to continue the theme of the original silver dollar coin, i.e. the voyageur image on the reverse.

However, the master dies struck in Ottawa Ontario were somehow- and amazingly, lost during transit to the minting facility in Winnipeg, Manitoba.

An Parliamentary investigation showed that the mint had no security plan to ship master dies, and had simply hired a local courier to save $43.50 over the cost of secure transport.  Obverse and reverse dies were also supposed to be shipped separately, but while packaged separately they had been sent together in the same shipment.

It was also the third time in five years the mint had ‘lost’ master dies.

Another investigation by the Royal Canadian Mounted Police concluded the dies had been ‘lost’ in shipment, while the mint insisted they had been stolen. The dies have never been recovered.

With fears of counterfeiting, a new design for the reverse to replace the ‘voyageur’.  This was created by Robert-Ralph Carmicheal showing a common loon floating on water.

Several names were proposed for the new coin, but ‘loonie’ stuck, mostly because of the loon image, but also because those not in favour thought the coin idea was ‘loony’ or foolish.

The coin was introduced on this date with 80 million distributed to banks across the country. Although not enthusiastically received by the public, the issue of its acceptance became forced when the mint printed the last dollar banknotes two years  in April 1989, and ceased distribution on June 30, the anniversary of the loonie’s introduction.

Since then however, the loonie has become widely accepted and when the two-dollar coin was introduced, although it featured a polar bear, it was dubbed the ‘toonie’ (two-nie)  in keeping with the loonie nickname.