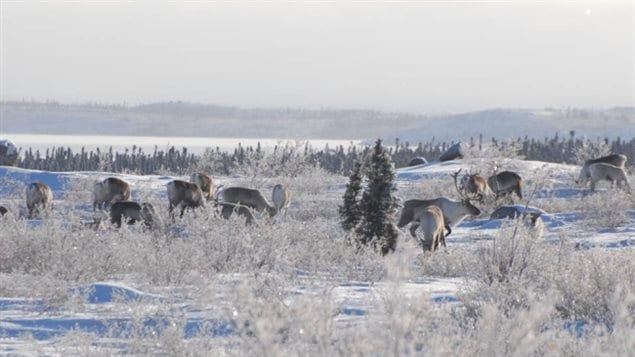 Caribou is an important element of Inuit diet, but the Inuit elders say that because the climate has changed the caribou habits, they animals are thinner and taste different.
Photo Credit: (ENR/GNWT

A new book looks at the human side of climate change in the Arctic.

While scientists continue to document and gather data on Arctic changes, two researchers talked to elders to get their personal observations of how things are changing. The observations range from melting permafrost, to changes in animal migration, to new species of plants, animals, and marine life arriving while others seem to decline, and how this is affecting the Inuit way of life, diet, travel, and traditions.

The 300-page book contains interviews with 145 Inuit elders ranging in age from 45 to 92. The interviews were conducted between 2007 and 2010 in eight communities in the Arctic territory of Nunavut, the far northern regions of Quebec (Nunavik) and in Labrador ( Nunatsiavut).

“Nowadays… the ripeness of the berries is changing, and the taste,” said Mona Tiktalek, an elder in Kugluktuk, Nunavut. “They don’t taste so good as they used to… and sometimes when they ripen some of them dry right away.”

Another elder, Laura Kohohtak noticed the same thing, “The blueberries are not like long ago; we used to get really big blueberries,” she said. “Now we don’t get very much rain and we just get small little blueberries. The taste is different. They are not as sweet.”

They also noticed more greenery moving in around their communities, and all say they notice shorter winters, spring arriving earlier, and summer and autumn lasting longer.

Like Laura Kohohtak in faraway Kuglugtuk, another elder in Umiujaq, along Nunavik’s Hudson Bay coast, also noticed the seasons were drier, along with stronger wind and lower water levels. Joshua Sala said the lichens and plants dry out, and the creeks he knew as a child no longer exist.  This was noticed as well by Joanasie Muckpa on the northern coast of Baffin Island who said, “I have noticed the land is drier than before and the smaller lakes have less water. This I have noticed: the lakes are shrinking.”

Caribou, once a staple of the Inuit diet, have also changed their migration pattern and timings.

The Inuit elders also say the taste of the caribou meat has changed.

A comment by elder Annie Lidd in the community of Nain, about halfway up the Labrador coast became the title of the book.

“The caribou taste different. Some of them are sick or something; there’s not enough patik [marrow] in their bones.” Some say it’s because their diet has changed from eating lichen inland, to eating trees and shrubs along the coast.

Another elder from Nain, John Jararuse, said, “To me [the caribou] seem a lot skinnier that they were before. Sometimes it seems like they have no fat, especially stags (males). We used to have thick ones before, but it’s not like it used to be anymore.”