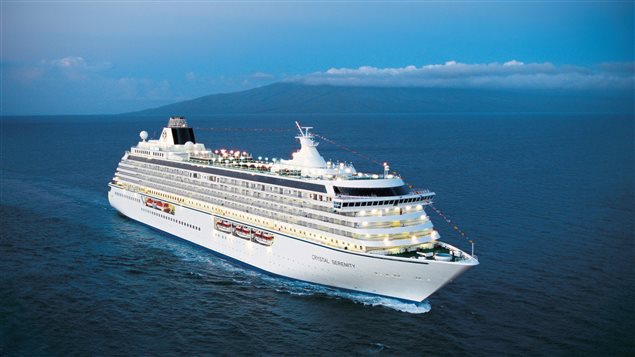 Nearly a century after Norwegian explorer Roald Amundsen and his crew of six sailed the Northwest Passage on his 47-ton sloop Gjöa, a 68,000-ton luxury cruise ship is setting sail from Alaska today to become the largest cruise liner to ever navigate through Canada’s Arctic Archipelago.

Crystal Serenity’s 32-day voyage across the forbidding Canadian Arctic will mark another Arctic navigation milestone as it becomes the largest passenger ship to sail through the poorly charted waters.

Billed as the “ultimate expedition for the true explorer,” the cruise liner with 1,070 passengers and 665 crew on board will leave Anchorage, travel north through the Bering Strait and across the Northwest Passage, making stops in small Arctic communities in the U.S., Canada and Greenland, and then in northeastern United States before completing its journey in New York City.

Michael Byers, Canada Research Chair in Global Politics and International Law at the University of British Columbia and the author of International Law and the Arctic, says such voyages carry risks and are bad for the environment.

In earlier interview with RCI, Byers said an accident is the most obvious hazard, noting that the area is so remote that it would take a search-and-rescue helicopter up to two days to get there.

“There are many other risks,” he said. “These are shallow, poorly-charted waters. There are remnants of icebergs, small pieces of glacial ice that, if struck by a ship, can punch a hole in the hull.”

The cruiseline says it has taken several precautions to ensure maximum safety.

The cruise liner will be accompanied by an escort vessel, an ICE 05-Class icebreaker, chartered from the British Antarctic Survey. The RSS Ernest Shackleton will have on board two helicopters and special equipment for real time ice conditions reconnaissance.

“The ice pilot on board the Shackleton is a veteran Canadian Coast Guard officer having served as Captain of Canada’s largest Polar Icebreaker,” the company said on its website.

Crystal Serenity itself will be equipped with “two ice searchlights, a high-resolution ice radar, forward looking sonar and thermal imaging equipment will be installed to allow the vessel to scan the waters ahead both above and below the surface for underwater obstructions or uncharted rocks,” the company said.

While cruise ships have less fuel than do oil tankers, any spill would be difficult to clean, given that there is little equipment, few people and few government ships in the Arctic. A spill in August or September would leave little time before total darkness falls upon the Arctic for many months. All this, Byers said, makes a clean-up “almost inconceivable.”

Crystal Serenity is expected to make three stops in the Canadian Arctic: in Ulukhaktok, Northwest Territories, and in Cambridge Bay and Pond Inlet, Nunavut.

These stops offer the passengers the opportunity of firsthand experience of modern life in the Arctic and for the communities to educate their guests about the life beyond the Arctic Circle.

“We will be educating them on our reality, and hopefully they will realize the importance of seals and marine mammals to our diet,” Vicki Aitaok of Cambridge Bay told Nunatsiaq Online newspaper. “We have no farms, no slaughterhouses. We kill what we eat and eat what we kill. The animals are not our pets, but our survival.”

With additional reporting by Lynn Desjardins