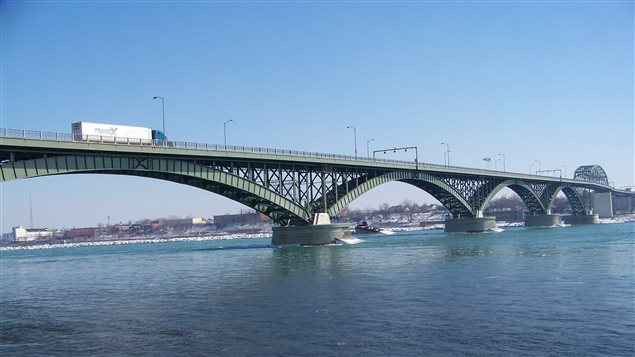 The Peace Bridge, seen from the Canadian side, crosses the Niagara River, connecting Fort Erie, Ontario to Buffalo, New York in t he United States. This is one of the possible routes 150 trucks carrying liquid radioactive waste might travel.
Photo Credit: wikipedia

Radioactive liquid nuclear waste could be transported by armed convoy, 1100 miles over the Great Lakes water system from Chalk River, Ontario to the Savannah River Site in South Carolina for the first time, and it could begin as soon as September.

That’s if a challenge by seven nonprofit groups filed on August 12, 2016, is unsuccessful. The coalition is requesting an injunction from the federal court in Washington, DC, to halt the transport until an adequate environmental impact statement is completed.

In 2012, at the nuclear security summit, then Prime Minister Stephen Harper commited to returning highly enriched uranium (HEU) inventories, to the United States, to reduce the risk of nuclear terrorism. The threat of an act of terrorism en route has not been adequately factored into the decision, considering the rise of ISIL since 2012.

“a mobile Chernobyl on steroids”

Gordon Edwards, president of the Canadian Coalition for Nuclear Responsibility was part of a telephone briefing by the coalition earlier today. Advocates from Canada and the United States voiced their concerns and opposition.

“In the 75 years of the nuclear enterprise in North America this highly radioactive liquid waste has never been transported over public roads even though they have millions of gallons of this stuff in three different sites in the United States, and it’s regarded as the most toxic radioactive material really on earth.” Edwards says.

Kevin Kamps, of the Radioactive Waste Watchdog, Beyond Nuclear, based in Maryland in the United States described the idea as “a mobile Chernobyl on steroids”

Gordon Edwards says that’s because this liquid waste is like the spent nuclear fuel that caused the meltdown in Chernobyl and the triple meltdown in Fukushima.

“a kind of a witches brew of radioactive materials”

“This is irradiated uranium which has been dissolved in nitirc acid and therefore converted to a liquid form so that we have dozens, many dozens of radioactive materials in this mixture, it’s a kind of a witches brew of radioactive materials, all of the materials that are in spent nuclear fuel can be found in this liquid waste which is in one tank at Chalk River, Ontario, called the FISST tank, it stands for Fissile Solution Storage Tank, 23000 litres, that’s 6,000 gallons and that’s what they want to transport in 100 to 150 truckloads over a period of several years.”

Edwards say it is totally unecessary. He says the tank has been full since 2003, the result of producing medical isotopes, and for the last 13 years, they have been solidifying this material on site. He says when Chalk River got its license in 2011 they said that they would be solidifying it and downblending it to remove the security risk.

Asked why there is no outcry in Canada, why there is no injunction being sought here to prevent the transportation, Gordon Edwards points to the gutting of the environmental safety legislation that took place under the Harper governmnent.

The Canadian Nuclear Safety Commission (CNSC) is supposed to be an independant body, but Edwards recalls the firing of the head of this organization, Linda Keen, for trying to enforce their own regulations.

The new head of the CNSC, Michael Binder, has said his mission is to “streamline the approvals process”, according to Edwards. He says we have a problem in Canada where the industry and the regulator are very much on the same wavelength, and the public has no say in any of these matters.

Catherine McKenna, the new federal Minister of the Environment established a four-member panel to review Canada’s environmental assessment process, but Edwards says it is not likely the panel will have reported back in time to have any bearing on this imminent issue.

For now, keeping the trucks from Chalk River, Ontario, from rolling out, under armed guard, remains in the hands of the U.S. federal court.