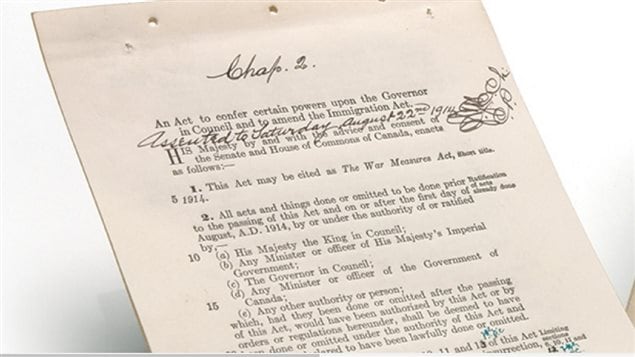 The War Measures Act attested to on Aug 22, 1914, giving the government wide powers to enact controls over the economy, suspend civil liberties, and control virtually all aspects of society.
Photo Credit: Government of Canada

At the start of First World War, the Canadian Government voted in an “Act to confer certain powers upon the Governor-in-Council in the event of war, invasion, or insurrection, real or apprehended”. The proposal came in effect on August 22, 1914, and was retroactive to the beginning of the month.

Commonly known as the “War Measures Act” it gave Canada’s government leaders sweeping powers over society and civil liberties without having first to resort to Parliamentary approval and vote.

It gave the government powers including:

On this first occasion, the Act remained in force until  January 10, 1920.

As time would later prove, the Act allowed for actions which later would be deemed unnecessary and indeed reprehensible.  In World War I, this included the  internment of thousands of Canadians of Ukrainian origin, deemed “enemy aliens” and stripped of certain possessions. Many Germans and Austrians were also interned as potential threats.

This would occur again when the Act was invoked a second time during World War II, when Japanese Canadians were also perceived as threats and many had their land and possessions confiscated and were sent to internment camps.

The third and final time the War Measures Act was invoked was in 1970. This was during the so-called “October Crisis” when the Marxist influenced Quebec separatist group, the Front de Libération du Québec (FLQ) kidnapped a British diplomat in Canada, and the Quebec cabinet minister Pierre Laporte whom they later murdered..

This came after years of bombings and robberies in which many citizens were maimed and some killed.

The ongoing terrorist threat was deemed by both the Quebec and federal governments to be an apprehended insurrection, theoretically justifying the invocation of the War Measures Act.

The shocking presence of armed military personnel in the streets of cities like Hull, (across the river from the national capital, Ottawa) Montreal and Quebec City and others was virtually unheard of in Canadian history, and along with mass arrests of hundreds of suspected separatist sympathizers.

it led to such an outcry in the province that the Act was later repealed to be replaced with the much less sweeping Emergencies Act in 1988.