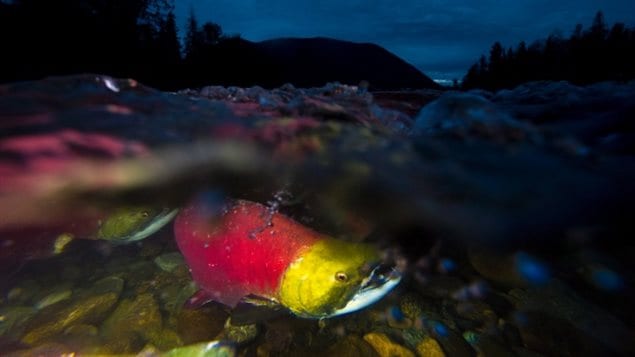 Sockeye salmon are a cold water fish and may be succumbing to higher temperatures in the Pacific Ocean and the Fraser River.
Photo Credit: Canadian Press

The official forecast for sockeye salmon in western Canada’s Fraser River has dropped from 2.3 million to 1.1 million, reports CBC. If it holds, that would be the lowest number on record. The government has suspended all sockeye fisheries there including commercial and indigenous.

The drop is being blamed on a decrease in the number of existing parent fish, a large area of warm water in the Pacific Ocean and above-normal temperatures of river water.

Sockeye travel the north Pacific and move into rivers to spawn at this time of year. They are the third most abundant species of Pacific salmon and are a key to North American commercial fisheries. The name sockeye is a poor translation of the native word suk-kegh, meaning red fish.

The Pacific Salmon Commission measured water in the Fraser River on August 18 and found it to be 20.6 degrees C or 2.5 degrees higher than the average for that date. Salmon are a cold water fish. Adults begin to die when the water temperature goes above 18 or 19.

The second most important sockeye river in the province of British Columbia, the Skeena, saw historic lows for the fish in 2013. The fishery there closed for the first time ever.