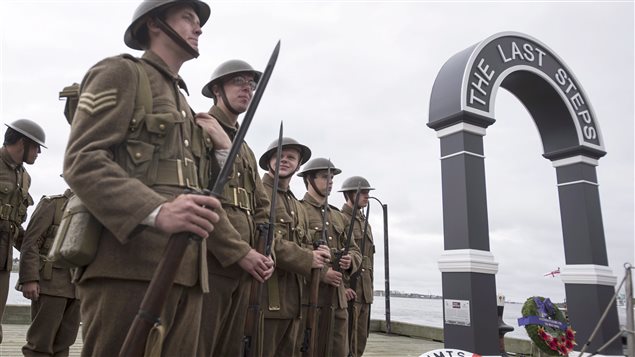 Soldiers in period dress attended the unveiling of “The Last Steps” memorial in the eastern port of Halifax.
Photo Credit: Darren Calabrese/Canadian Press

A memorial was unveiled in the eastern city of Halifax today to honour the tens of thousands of Canadian soldiers who left from there to fight in World War I and never returned.

Canada was a colony of Britain so when that country went to war against Germany in 1914, Canadian troops were sent to battle. Nearly 61,000 of them died in what was the bloodiest conflict in the country’s history. But there was great pride in Canadian soldiers’ achievements in battles at Ypres, Vimy and Passchendaele.

‘The Last Steps’ on home soil

Today, soldiers re-enacted the departure of soldiers in a ceremony unveiling a wooden arch bearing the words “The Last Steps.” Boot prints had been burned into the boardwalk leading to a gangway to symbolize the last steps many soldiers took on their homeland.

The installation is the first big project of the Army Museum Halifax Citadel.