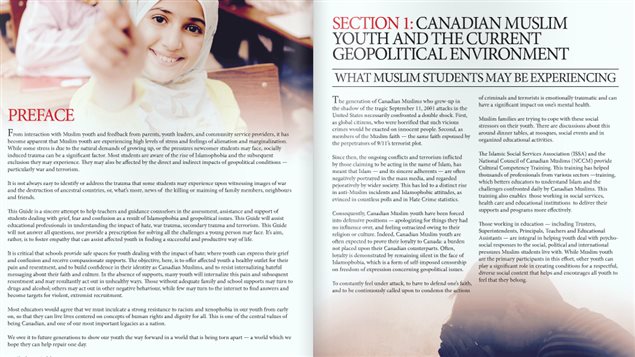 The National Council of Muslim Canadians produced a guide against Islamaphobia as a resource for educators as students return to classes this fall.
Photo Credit: NCCM

Islamaphobia is a growing problem in Canada. According to Statistics Canada‘s police reports of hate crimes, there was a doubling of attacks against Muslims between 2012 and 2014. The encounters varied from verbal harassment to physical harassment and the vandalism of places of worship.

Amira Elghawaby is the director of communications for the National Council of Canadian Muslims. She says it’s understood that as much as two-thirds of racist assaults and attacks do not get reported. Women wearing the hijab have been subject to all manner of insults and assaults, including one young mother being attacked in front of her 8 year-old daughter.

Elghawaby says the current racist rhetoric of the U.S. political campaign, as well as the anti-Muslim sentiment expressed in last summer’s Canadian election campaign, with suggestions of a hot-line to report barbaric practices, establishes a larger context that can leave many Muslims uncomfortable in Canada, as part of North America. Elghawaby said the NCMC was getting more calls and inquiries from families and educators concerned about the effects on their children and students.

“There is no utopia but we certainly work very hard in Canada to maintain a sense of multiculturalism, of diversity”

The 17-page guide also addresses the geopolitical reality that many Muslim immigrants and refugees to Canada may have come from. The children and teenagers, who were part of the 25,000 Syrian refugees welcomed through the year, are now beginning their first full year of school.

Elghawaby says the guide will help educators be sensitive to the needs of young people who may be traumatized and suffering PTSD following harrowing journeys and experiences before coming to Canada. It prepares teachers to recognize students who may be suffering feelings of alienation, feelings of fear and anxiety, or possibly acting out aggressively, or withdrawing.

The guide offers practical suggestions on how educators can help: “how can you have safe spaces in your classroom, how can you encourage these young people to talk about what their experience is, how can you ensure that when you’re holding a lesson or a discussion about issues that may come close to home, hit close to home, that you’re really conscious of how this may be impacting the students in your classroom that have maybe a direct relationship with the topic.” she says.

The guide is available online and printed copies can be requested. When asked about racism in Canada Elghawaby acknowledges that “unfortunately it is a reality that we all grapple with and challenge and counter every day.” she says. “There is no utopia but we certainly work very hard in Canada to maintain a sense of multiculturalism, of diversity and Canada does certainly set a very good example for the rest of the world in terms of promoting that kind of intercultural dialogue, promoting understanding and taking it even a step further beyond tolerance, more about you really getting to know one another and promoting a very strong sense of dialogue and openness.