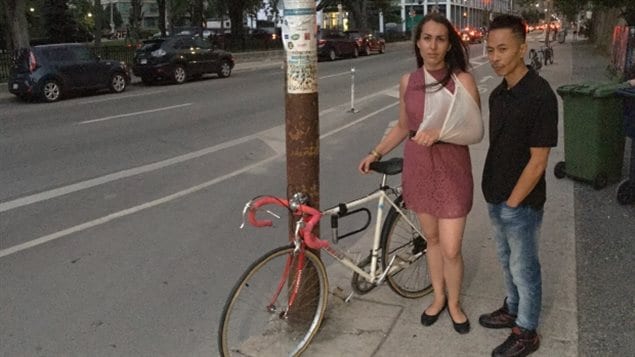 Cyclist Chelsea Mobishwash suffered injuries after being doored by a trucker. Her friend, Raymond Geluz, was behind and made sure she got medical help.
Photo Credit: Petar Valkov/CBC

Video from a nearby shop captured Chelsea Mobishwash cycling down a major thoroughfare in downtown Toronto, the door of a truck opening and knocking her off her bike. The accident occurred on August 26 as she was riding to work, reports CBC. The truck was parked in a lane reserved for bicycles.

Mobishwash suffered severe bruising and needed a few stitches. She was lucky. Some cyclists have died after being doored. She has filed a police report and released the video to raise awareness about cycling safety.

Several Canadian cities are trying to encourage people to travel by bicycle.

The province of Quebec has set fines for drivers who open their doors and hit cyclists. It also recently passed a law obliging drivers to keep a distance from cyclists of one meter.

In a recent incident in Montreal, a cyclist was doored and publicly complained that police did not fine the driver. The incident made headlines and activists urged the city to enforce cycling safety laws.