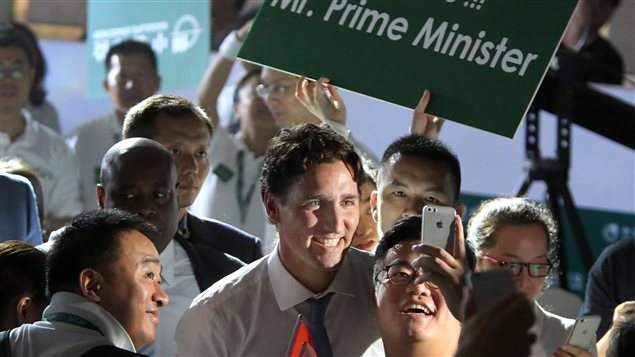 After being well-received while visiting China, Prime Minister Justin Trudeau meets leaders of the world’s major trading nations at the G20 on Sept. 3 and 4, 2016.
Photo Credit: Chinatopix via AP

Canada’s Prime Minister Justin Trudeau has been well-received in China, both by its people and politicians.  He managed to stave off a plan to dramatically restrict Canadian exports of canola to China, and raised human rights issues with leaders behind closed doors, to avoid annoying the host country and allowing it to save face.

“To go in a bull-in-a-china-shop approach would not serve our interests. They would have just shut him down,” says Colin Robertson, a former diplomat and vice-president at the Canadian Global Affairs Institute.

“By having our ambassador…who has had several postings in China say that…there has been a decline in human rights, that will register probably more profoundly than if Justin Trudeau has raised it or if (foreign affairs minister) Stephane Dion had raised it.”

Trudeau moves on Tto the G20 meeting of major trading nations hosted for the first time by China on Sunday, Sept 4 and 5.  “For China, after feeling that they had been supressed and subdued by the west from roughly 1800 to 1950, they feel in essence that they have spent the last 50 years re-establishing China as a great power,” says Robertson.

Calming the winds of protectionism

It is important for Trudeau to meet face-to-face with world leaders at the meeting to discuss economic multilateralism. “Basically it means business and trade, so kind of a short hand for globalization,” he says.

There are winds of protectionism blowing, he adds, noting comments from both U.S. presidential candidates Donald Trump and Hilary Clinton and China’s effort to restrict the import of Canadian canola. So, leaders will seek to renew their commitments to open trade.

Themes important for China and Canada

“Both of these are major themes as part of economic guidance of the economy that, I think, Justin Trudeau will want to see moved forward and that Ban Ki-moon, the UN secretary-general would like to an action plan come out of this,” says Robertson.