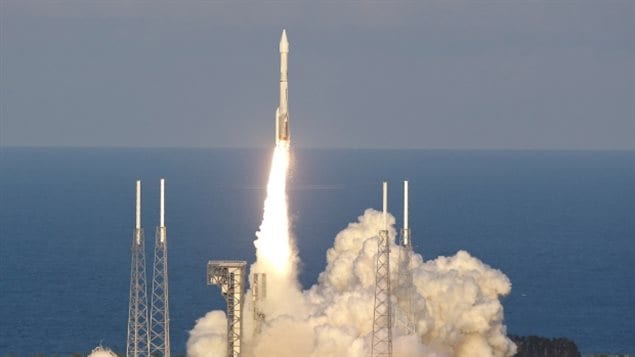 Canadian technology: To infinity..and beyond !

Well not quite,  but not only is Canadian technology is playing a vital role in a new space mission, but the unique effort is to send a probe into space and then have it come back.

The mission and spacecraft is called OSIRIS-REx — or the Origins, Spectral Interpretation, Resource Identification, and Security-Regolith Explorer.

It US mission blasted off on Thursday from Cape Canaveral in Florida, with the ambitious task of heading to a distant asteroid called Bennu, collecting samples of the asteroid, and then returning to Earth with them.

The Canadian contribution is a highly sophisticated laser mapping techonology,  called the Osiris Laser Altimeter (OLA)   It contains approximately 4,000 mechanical parts and 3,000 electrical parts, and uses about the same power as a 75 watt light bulb.

It’s job is to shoot laser signals at the surface of the asteroid, measure the time to reflect back and so create an extremely accurate 3-D map of the surface.  This will allow scientists to determine the best spot for samples and landing to take place.

Michael Daly, team leader at York University which helped create the OLA, said, “From a science perspective, we need to understand the current state and the evolution of the asteroid. One of the goals of the mission is to understand the organic material content of asteroids. “The sample will provide a snapshot of materials available during the formation of the solar system.”

Bennu is very dark and believed to be high in carbon, and other compounds considered the building blocks of life. By studying the samples of dust picked up by the probe, scientists hope to learn more about the origins of life on earth.

Quoted by CBC, Dante Lauretta who is leading the mission says, “We’re going to Bennu because it’s a time capsule from the earliest stages of solar system formation”.

Another aspect of the mission is to determine to what extent Bennu might pose a threat to Earth. The asteroid, at about half a kilometre in diameter is in what is known as a near-Earth orbit, and there’s a very slim chance, almost 1 in 3000, that it could hit the Earth between 2175 and 2199.

Osiris Rex will take a couple of years to meet up with Bennu, and is expected to return in 2023.

Of the overall $1-billion cost, the Canadian Space Agency total investment in the mission is about $61 million over the 15 years of the project.