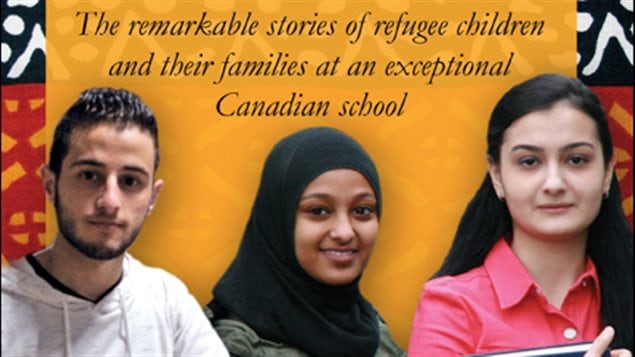 School principal David Starr had just won a local writing competition when a parent congratulated him and told him the next thing he should do is write her story. Starr asked to hear it and was intrigued.

“She proceeded to tell me this remarkable narrative of how when she was 14 years old, she and her cousin had to leave their community in southern Sudan because of the war. They travelled with a group of other young children walking on foot across the breadth of the country to a refugee camp in Ethiopia where she stayed for a couple of years before she was forced out and up into Kakuma camp in Kenya.

“By the time I was done listening to her I’m thinking ‘oh my goodness me, that’s not a story, that’s a (movie producer) Steven Spielberg epic.’” Starr decided to collect the stories and published them in a book called From Bombs to Books: The remarkable stories of refugee children and the families at an exceptional Canadian school.

Worried about catching up, graduating

Starr has many refugee children at his school in Burnaby, in the western province of British Columbia. As principal, he tries to make sure the students have as normal a school experience as possible. School just started this week and he says it’s normal for staff and students to be excited and nervous.

“And for a lot of these (refugee) kids it’s all that and more. They’re exceptionally happy to have an opportunity to be in school. But I think there’s also a tremendous level of anxiety…

“They know they’ve missed school. They’re quite worried about being able to catch up or graduate.” There are programs to help.

Students get help and instruction

At the district level, refugee families are directed to a welcome centre where they meet with settlement workers. The workers make sure the students have the materials they need and accompany them to the neighbourhood schools to introduce them and their families to the staff. They also make sure housing and food needs are met.

At his school, Starr has set up a 6-10 week reception class that involves a couple of hours a day of intensive instruction in language, culture and numeracy every day to help children acclimatize. He also pairs students with buddies to help them through the other regular classes.

Starr says it has been “remarkably humbling” for him to have been entrusted with the stories of these refugees who have become his friends. And “you realize that school is so tremendously important to these kids…after what they and their families have been through…

“It really makes you want to work tremendously hard to make sure that the school experience is as successful as possible.”