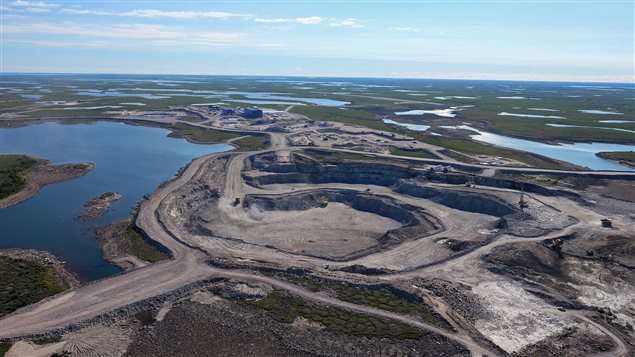 The Gahcho Kue diamond mine, located about about 280 kilometres northeast of Yellowknife in the Northwest Territories, is shown in a handout photo.
Photo Credit: PC / THE CANADIAN PRESS/HO-De Beers Group of Companies

Canada is set to cement its position as one of the big players in the global diamond industry with the official opening of the Gahcho Kue diamond mine in the Northwest Territories today.

The mine, which sits in the tundra about 280 kilometres northeast of territorial capital of Yellowknife, is estimated to be one of the 10 biggest diamond mines in the world. It is expected to produce an average of 4.5 million carats a year over the life of the mine, according to De Beers Canada.

Gahcho Kue, a joint venture between De Beers Canada (51 per cent) and Mountain Province Diamonds (49 per cent), is the sixth diamond mine opened in Canada since BHP Billiton’s EKATI Mine in the Lac de Gras region, about 300 kilometres northeast of Yellowknife, started in 1998.

“It will be a very significant contributor to the NWT economy,” Kim Truter, CEO of De Beers Canada, told The Canadian Press.

A socio-economic impact report released by De Beers earlier this months estimated that the operation will provide $6.7 billion to the Canadian economy over its estimated life span of 12 years and has generated $440 million to the territory’s economy so far.

The mine supported more than 2,700 direct and indirect jobs in 2015, with employment at the site representing more than 10 per cent of employment in the NWT’s extractive industries, according to the report.

De Beers expects will need about 530 workers to operate.

Truter said the company has been working to share the benefits of Gahcho Kue with local First Nations and Métis, with impact benefit agreements signed with six groups in the area.

Canada’s diamond production is expanding at a time of growing volatility in the industry. Global sales of polished stones declined 2 per cent last year to $24.7 billion US as demand fell in emerging markets like India and China.

Lower prices and market instability meant a much bigger drop in the sales of rough diamonds, which dropped about 30 per cent to an estimated $13.7 billion US, forcing De Beers to close its Snap Lake diamond mine in December last year at a loss of more than 400 jobs.

But the company is banking on the purchasing power of the Millennial generation (those aged 15-34) who spent more than $25 billion US on diamond jewellery in 2015 in the four largest markets – the US, China, Japan and India, according to The Diamond Insight Report 2016.

“Most encouragingly, however, Millennials are still 10 years away from their most affluent life stage and the generation comprises more than 220 million potential diamond consumers in the four main markets,” said Bruce Cleaver, CEO, De Beers Group. “The diamond industry therefore has a major opportunity on the horizon but it will only capitalise on it fully if it continues to innovate and invest across the value chain.”

Links to our series on diamond mining in the Northwest Territories:

Diamonds – the darker side of prosperity

Ontario joined Canada’s diamond club in 2008, when De Beers started commercial diamond production at its Victor mine, about 90 kilometres west of the First Nations community of Attawapiskat, in northern Ontario. And Quebec is expected to join Canada’s diamond producing club once the Renard Mine owned by Stornoway Diamonds becomes operational by the end of 2016.