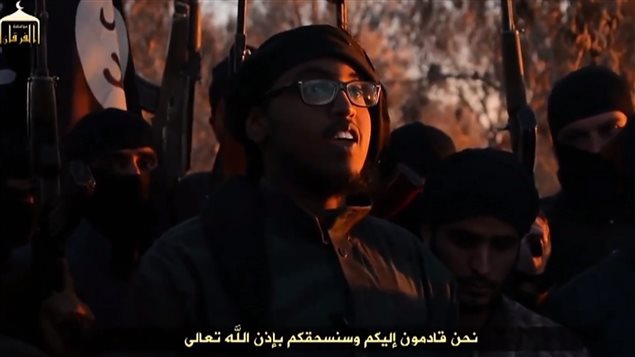 ISIS and the internet- turning a tool into a weapon

The young man who has lived next door for years suddenly grows a beard and starts criticizing western life; the young woman you’ve seen growing up, stops wearing make-up, begins to dress much more conservatively. One day, they disappear.

How did that happen? Canadian journalist Martin Himel wanted to find out.

Himel has covered many conflict situations including some with groups classified as terrorist organizations.

He says however that ISIS is different from anything else he has ever seen.  He says this is a 21 century terrorist group, loosely defined, that reaches across traditional cultural and ethnic barriers, using and entirely new platform, the internet, and turning it into an effective weapon like no-one before.

Himel wanted to discover how ISIS-DAESH manages to do this and recruit westerners to join their terrorist organization.

In the documentary he recruited two security experts who created online personalities.  The characters were created according to the profiles ISIS is known to seek out, i.e., somewhat isolated individuals.

The man and woman took fake names,  “Theo” and “Sara” and then added adopted Islamic names. They set up websites or social media sites and profiles, and soon ISIS recruiters found them.  They were shown how to avoid detection by authorities in online communication and how they would be contacted and guided on a trip to Syria to join ISIS. They are given tips on what to do to avoid suspicion before leaving, what to bring and not bring, and how to fool border guards as to their intentions and ultimate destination.

Theo is guided toward a terrorist cell in Belgium, ostensibly to become a fighter, while Sara is guided towards becoming a jihadi bride, a second wife to a Swedish convert, now classified as the number one Swedish terrorist.

Himel points out that for many young people seeking answers in a world full of levels of grey and seemingly confusing limits on right and wrong, ISIS promises them clear black and white answers, clear directives on how to live, clear statements on what and who are good and bad

He  says the documentary shows how powerful the internet is, and how dangerous an unregulated net can be. At the same time, how skilful ISIS is in convincing people to travel half way around the world to join their terrorist cause.

Undercover in ISIS will be broadcast on Canadian TV, the CBC’s Documentary channel, on Sunday September 25 at 8pm and again at midnight (Eastern time). A deal has been made with SVT to broadcast the documentary in Swedish, and it may also soon be broadcast in the US, although a confirmed deal is still in the works.

UNDERCOVER IN ISIS is produced by Vigilance Prods. Inc. in association with documentary Channel and with the participation of the Canadian Media Fund (CMF), the Rogers Documentary Fund, and the Canadian Film or Video Production Tax Credit.