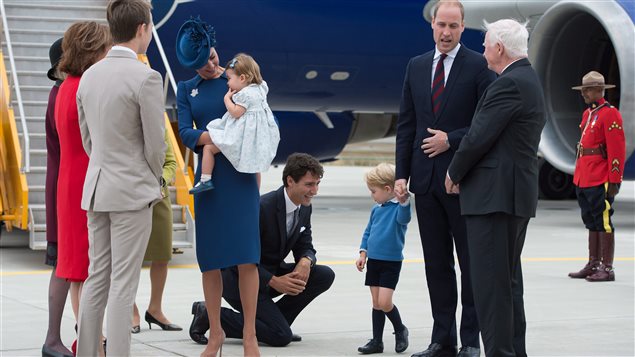 It might enter the annals of Canadian history as the cutest royal snub.

But Prime Minister Justin Trudeau’s failed bid to high-five three-year-old Prince George who’s visiting Canada for the first time had the British media in a tizzy.

Monday’s Daily Mail featured Prince George’s royal ‘snub’ as part of their coverage of the Royal Tour of Canada.

Trudeau and his wife Sophie Gregoire Trudeau were among several dignitaries who came out on the tarmac of Victoria’s airport to greet the Duke and Duchess of Cambridge and their children Prince George and 16-month old Princess Charlotte as they emerged from the airplane at the beginning of their Royal Tour of British Columbia and Yukon on Saturday.

After shaking hands with Prince William and Kate, Trudeau knelt down to meet George, who seemed a bit grumpy but remarkably well-composed for a toddler who just emerged from a very long flight across the Atlantic Ocean all the way to Canada’s Pacific coast.

Trudeau, who has three young children of his own, lifted his hand, trying to high-five George, but the little prince shook his head and did not accept the gesture.

Videos and photos of the interaction were shared widely by British media, which follows the tour closely in part because the visit marks the first time William and Kate are doing an official tour with both their children along.

The Mirror wrote: “Superstar politician Mr. Trudeau might have endeared himself to millions online through his outspoken feminism, support for diversity and willingness to embrace Internet memes, but it seems to take more than that to impress Will and Kate’s eldest.”

The Independent’s story headlined: “Prince George leaves Justin Trudeau hanging after he goes for a high-five.”

The Daily Mail shared a story with the headline: “Sorry, one doesn’t high-five with commoners.”

The Telegraph also took note of the incident with a story headlined: “Prince George and Princess Charlotte revel in a little mischief on Canadian tour.”

William and Kate are on an eight-day tour of British Columbia and Yukon to “deepen their relationship” with Canada.

On Monday, stormy West Coast weather scuttled their plans for an aerial tour of the majestic Great Bear Rainforest on B.C.’s Central Coast. But William and Kate are still expected to visit the Heiltsuk First Nations community of Bella Bella, where they will be greeted with a traditional welcoming ceremony and a cultural sharing ceremony at the Bella Bella Community School.