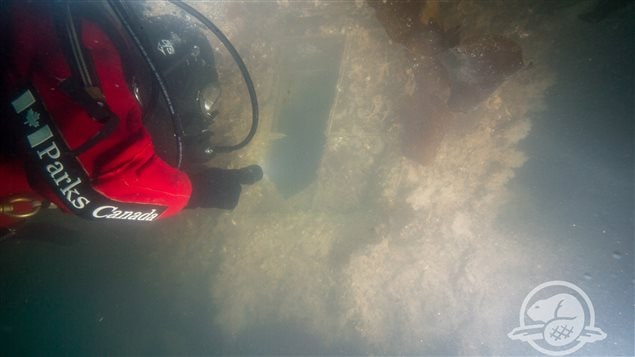 Amazingly, a captain’s cabin window at the ship’s stern is still in place. During these dives, the weather conditions were bad with poor underwater visibility in Terror Bay.
Photo Credit: Parks Canada

Canadian officials have confirmed that a shipwreck found in uncharted waters of a remote Arctic bay earlier this month is in fact HMS Terror, the second of two British ships lost in the ill-fated 19th century attempt to sail through the Northwest Passage.

The wreck of the British Royal Navy ship, which was abandoned in sea ice in 1848 during Sir John Franklin’s disastrous Arctic expedition, was found on September 3 by the Arctic Research Foundation’s Martin Bergmann research vessel thanks to a crucial tip by an Inuk crew member.

It was located in the waters of coincidentally named Terror Bay on the south-west corner of King William Island in Nunavut, Canada’s northern most territory, about 100 kilometres north of where the wreck of the expedition flagship, HMS Erebus, was found in 2014.

However, for reasons that are still unclear federal officials learned about the find only on Sept. 11, giving underwater archaeologists with Parks Canada, the federal agency that manages Canada’s natural and historic sites, very little time to examine the wreck as the already short Arctic navigation season was coming to the end by mid-September.

Bad weather delayed the Parks Canada team on board the Canadian Coast Guard Ship Sir Wilfrid Laurier three days before it was able to make its way to Terror Bay.

“The underwater archaeology team confirmed that the wreck discovered by the Arctic Research Foundation is HMS Terror on September 18, 2016,” said Marc-André Bernier, head of Underwater Archeology at Parks Canada during a teleconference call with reporters. 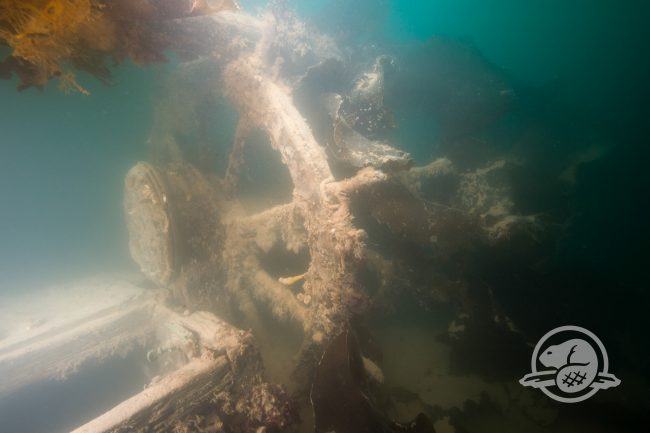 The ship’s helm (wheel) astern of the skylight for the Captain’s Cabin. (Parks Canada)

The archaeologists based their validation on side-scan sonar survey and three dives on the wreck, Bernier said.

“The dives took place during difficult weather conditions and through poor visibility,” Bernier said. “The wreck’s upper deck is heavily covered in silt and marine life.”

Nevertheless, the divers were able to observe a number of features that were typical or unique to 19th century British polar exploration ships and the wreck has a number of design specifications that were common to both HMS Erebus and HMS Terror, including three masts, iron bow sheathings and a double-wheeled helm, Bernier said.

That and the fact that there are no wrecks other than HMS Erebus with these features in the region, made the archaeologists absolutely certain of their validation, Bernier said.

The work by Parks Canada confirmed reports by the Arctic Research Foundation, which had managed to manoeuvre a small, remotely operated vehicle through an open hatch and into the shipwreck. 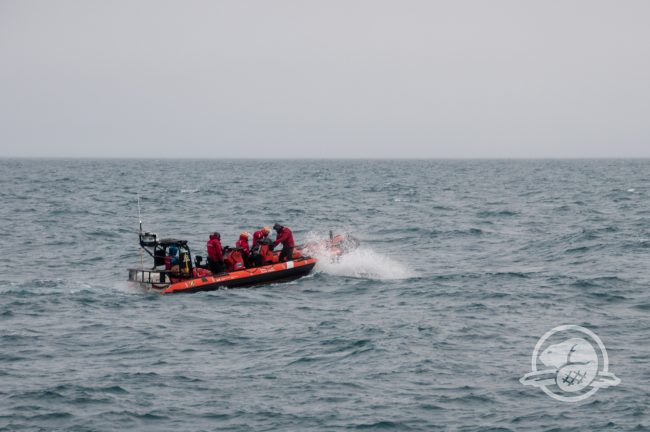 The ship’s cabins and gallery windows are largely intact, the hatches closed up and many of the partitions potentially still in place, says Parks Canada senior underwater archeologist Ryan Harris.

“That said, we were able to see, given the turbidity, that there is a thick lens of sediment on the well-preserved upper deck,” Harris said. “If there are any artifacts on the deck, they are likely concealed by that sediment.”

But it’s what is inside the ship that “boggles the imagination,” Harris said.

“It’s a largely sealed environment that could very well preserve remarkably well otherwise delicate materials, like organic materials, written documents, charts and all matter of material like that.” 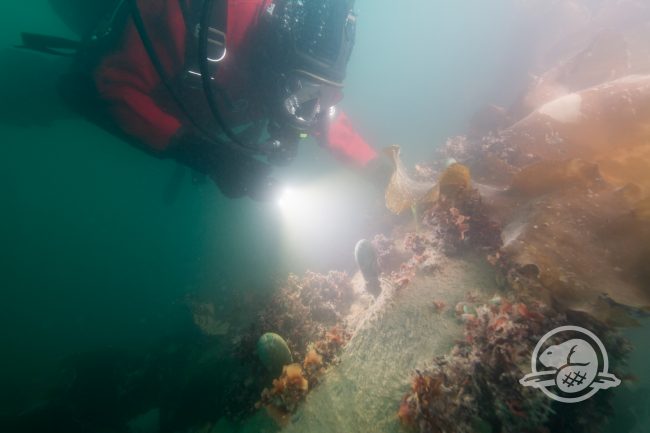 Here, we see the ship’s belaying pins still in place on the port side. They would have been used to fasten the ship’s ropes. (Parks Canada)

Ultimately, Harris said the goal is to try and figure out how the Terror ended up where it is.

“Obviously the first question is how did get through Alexander Strait?” Harris said. “Was it indeed remanned at some point as what appear to be the case with Erebus?”

The mysterious disappearance of the 129-crew expedition, headed by Sir John Franklin, had bedevilled the Royal British Navy and generations of historians and polar explorers for almost 170 years.

The crew of the Martin Bergmann was part of the Parks Canada-led search for the Terror that also involved the CCGS Sir Wilfrid Laurier and the Royal Canadian Navy’s HMCS Shawinigan. 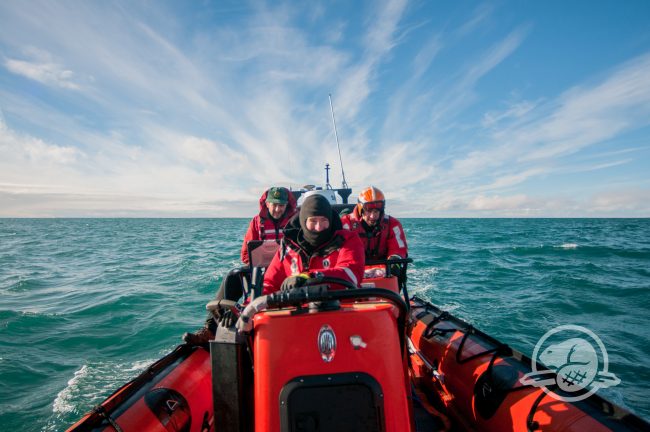 The discovery of HMS Terror was made possible thanks to a long-term partnership with northern communities, the Kitikmeot Inuit Association, the Government of Nunavut, Parks Canada, the Canadian Coast Guard, the Royal Canadian Navy, Environment and Climate Change Canada, and many other government, private and non-profit partners, including the Arctic Research Foundation, said Bernier.

Parks Canada said it will work closely in partnership with Inuit organizations, particularly the Nunavut government and the Kitikmeot Inuit Association, on joint ownership of artifacts from both the Terror and Erebus.

“Joint ownership of the artifacts from HMS Erebus with the Inuit Heritage Trust sets the stage for us to tell the stories of Nunavut’s history, culture and heritage,” Catherine McKenna, minister responsible for Parks Canada, said in the news release.

“I am thrilled about the discovery of HMS Terror, and am just as committed to working with the government of Nunavut and Inuit partners to protect and present all of the Franklin artifacts.”

Parks Canada officials are also in negotiations with officials in the United Kingdom, which technically owns the two ships.