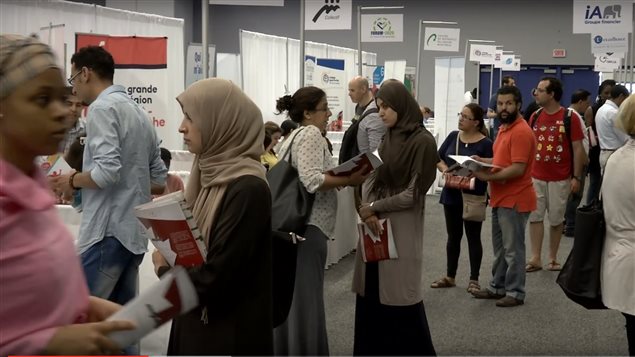 Participants of the first Maghreb fair organized by the Conseil des Maghreb au Canada browse through information booths of some of the companies presented at two-day event in 2015.
Photo Credit: Canada International Media

Hundreds of immigrants from Northwestern Africa are expected to participate in a weekend professional networking fair in Montreal that hopes to facilitate their integration into the Canadian society and the job market.

The Salon du Développement Canado-Maghrébin at the Palais de Congres convention centre also aims to feature the accomplishments of Canada’s Maghreb community, which includes immigrants from Libya, Tunisia, Algeria, Morocco and Mauritania, as well as boost business and social ties between Canada and Maghreb countries, said Randa Abdessalem, the communications coordinator for the fair.

(click to listen to the full interview with Randa Abdessalem)

The two-day event is organized by the Conseil des Magrébins au Canada (CMC), a non-profit organization that represents the interests of Canada’s Maghreb community, said Abdessalem who is also a member of the board of CMC.

The event opens on Friday and is open to everyone, not just the Maghreb community, Abdessalem said.

All the activities and workshops are free thanks to generous support from several sponsors, including Tunisair, the Tunisian national airline carrier, and Sentinel, a Canadian company that has operations in Maghreb.

“We have invited many distinguished guests, like ministers, members of parliament, ambassadors and councils, and more than one thousand visiting professionals – businessmen, doctors, university professors,” Abdessalem said. “We’ll have a special area, called VIP Corner, it’s an area of strategic development and networking.”

One of the biggest issues facing the 290,000-strong Maghreb community in Canada is employment, Abdessalem said. Many immigrants from Maghreb are having a hard time integrating into the Canadian job market and finding jobs that suit their qualifications.

“We have many exhibitors who are there to offer their services to the visitors,” Abdessalem said.

In addition to the networking opportunities, the visitors will also get help with writing their resumes, advice on job interviews and various employment issues from professionals working in different industries, Abdessalem said.

There will be a Youth Corner with educational activities for children from 4 to 15 years old.

And the fair has its own TV studio, which will feature several discussions on various themes: from systemic racism faced by the community to entrepreneurships, sports and the conflict in Syria, Abdessalem said.