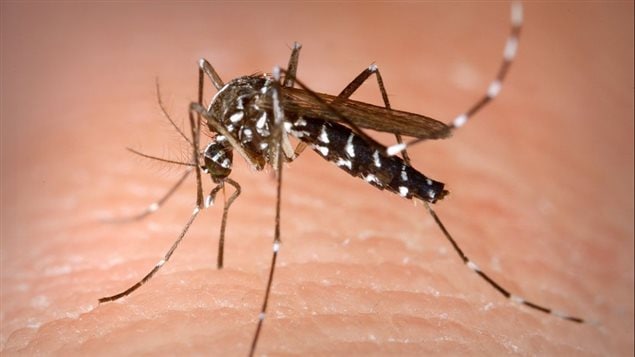 This is an Aedes albopictus female mosquito . the Aedes albopictus mosquito, also known as the Asian tiger mosquito, has been found to be a vector of West Nile virus. Aedes is a genus of the Culicine family of mosquitos.
Photo Credit: James Gathany/CDC-#4487

One of the mosquito species known to carry the Zika virus has been discovered in southwestern Ontario.

Aedes albopictus is also known as the Asian Tiger mosquito. This species is known as a carrier of the West Nile disease, but can also be a vector for Zika.

Four specimens were found in a mosquito trap set to monitor for West Nile, but according to the Windsor-Essex County Health Unit, the four of this species all tested negative for Zika.

In 2012, another Asian Tiger was detected in a trap in Windsor Essex, although this species is not usually able to survive in the Canadian climate. Others have been detected in the Niagara area as well. It is suspected the mosquitoes arrived in Canada from the US in shipping containers or other vehicles.

Aedes albopictus is a relative of Aedes aegypti, the most common vector for Zika and most of the infections in the Caribbean and now southern US, like Florida.

While Aedes albopictus is usually found in the southern US, it has reached some of the central US states.  Aedes aegypti meanwhile has not been found in Windsor

It is suspected that the unusually hot summer has allowed the Asian Tiger insects to stay alive in Canada. Dr. Gary Kirk, medical officer of health and CEO of the Windsor-Essex County Health Unit says Canada’s relatively cold winters should kill them off and prevent them from becoming established.