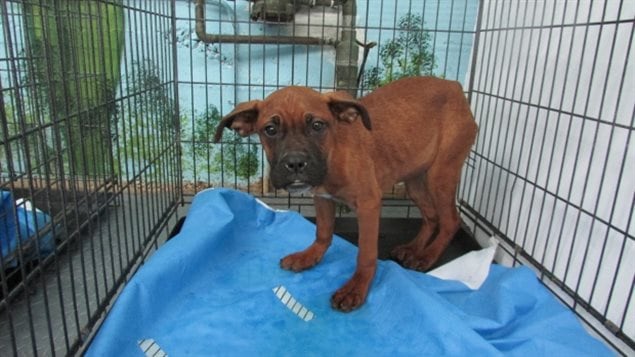 June 2015: Police in Laval Quebec (immediately north of Montreal) released this photo of one of five dogs found wandering in a parking lot. They were malnourished and had wounds leading police to suspect they were used in dogfighting. While dogfighting is illegal, the bill would have added that training dogs to fight would also be illegal. All five of the dogs had to be euthanized.
Photo Credit: Laval Police

Protecting animals, wild and domestic, from abuse would seem to be a good thing.

Animal rights groups have been fighting for years to modernize Canadian law with respect to treatment of animals, laws which in some cases have had little modification in over 100 years.

However, a bill introduced in the Canadian Parliament to update Canadian laws dealing with animal treatment has been voted down.

The bill identified as C-246 had a rather cumbersome title: ‘Modernizing Animal Protections Act- An Act to amend the Criminal Code, the Fisheries Act, the Textile Labelling Act, the Wild Animal and Plant Protection and Regulation of International and Interprovincial Trade Act and the Canada Consumer Product Safety Act (animal protection)

The bill was introduced as a ‘private member’s bill”, which historically have often failed.

In this case however, it was introduced by a member of the governing majority Liberal party. In spite of that, and the fact that previous Liberal governments have supported similar measures in the past which only failed to become law due to elections taking place, most of the Liberal majority voted against the bill and it did not pass.

Canada’s animal cruelty laws were first created in 1892, and have not been significantly updated since the 1950’s.  Basic aspects of the proposed, but now defeated bill sponsored by MP Nathaniel Erskine-Smith include

In terms of shark finning, a practice which results in the slow drowning deaths of an estimated 70 million sharks annually, with about 137,000 kg of shark fin is imported to Canada last year, which represents between 1.5 to 2 percent of the global trade, according to Erskine-Smith.

While concerns were raised about the laws possibly harm to agriculture, hunting, commercial and sport fishing,  Erskine-Smith took pains to say the bill would not affect legal activities, many of which were already covered in other legislation.

Rebecca Aldworth of HSI-Canada expressed dismay at Prime Minister Justin Trudeau, who voted against the bill the cabinet and most of the current government for a lack of support, but hopes they will study the proposal and introduce similar legislation as a government policy.