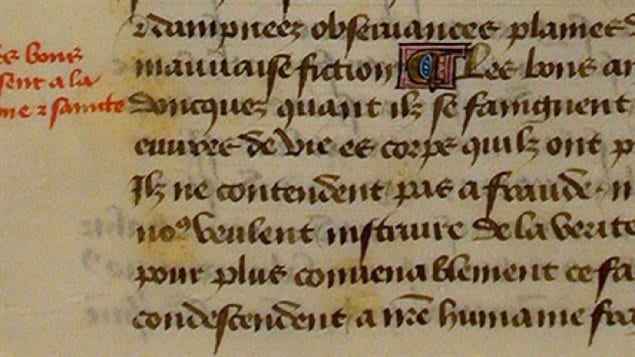 Handwritten in medieval French around 1460. Tinctor’s treatise is a magnificent, but ultimately sinister book calling for those in power to seek out witches and acts as an intellectual justification for their eradication.

The fascinating story of Tinctor’s “foul treatise” from 1460 in Flanders and Burgundian France, and how it ended up in Canada

It’s Hallowe’en in Canada, when children dress up in costumes and go door to door collecting candy treats. It’s a fun time. Costumes of scary witches, ghosts and monsters are long time popular favourites. But why are they scary?

In past centuries being accused of witchcraft were held responsible for all kinds of real and imagined “crimes”. Such an accusation could easily be a death sentence. One of the powerful forces behind the idea that demons and witchcraft actually existed and should be stamped out came from a fifteenth century scholar Johannes Tinctor.  Tinctor wrote an influential treatise on his opinion.

Robert Desjardins, then a PhD student discovered one of the ultra-rare copies of this ‘diabolical’ book in the basement of the University of Alberta library where it had lain mislabeled. He is now an independent scholar and graduate writing advisor at the university in Edmonton, Alberta

Written in medieval French about 1460, the book may have been the inspiration for a couple of centuries of witch-hunts and an ideology leading to the deaths of tens of thousands of innocent people.  The first large scale trials seem to have started around Arras in France about the time of Tinctor’s treastise, and then spread.

It has since been called Tinctor’s “foul treatise” as it gave the green light and even encouragement to witch trials. One section is a strident appeal to those in power to take action so as to prevent the “multiplying numbers” of  these witches, Satan worshippers and warlocks and their evil influence who would bring on the Antichrist and the “end times”. It was an intellectual justification for witch persecutions says Desjardins.

He has called it a terrifying book because it was specifically directed to the most powerful people in society in the mid to late 1400’s with a urgent call for them to take action in the face of this supposedly dire situation.

The book is believed to have come from the libraries of one of the nobles of France or of the low countries. It was then possibly taken to England by Edward IV who had been temporarily chased from England to the low countries.  Passing through several hands, it was purchased by an civil servant who came to Canada to become a leading civil servant in Alberta, and then donated it to the University, where is was not recognized for what it was until Desjardins, and professor Gow determined its incredible, and somewhat frightening significance.